Everything You Need to Know About Snorkeling Fins

Everything You Need to Know About Snorkeling Fins

If you Google “snorkeling fins” you’ll a vast array of  options from  long fins, short fins, medium fins, some that require you to wear a neoprene bootie, and some very complicated ones with what appear to be hinges or big splits in the fins. If you are new to the snorkeling game, you may not really know what’s what when it comes to snorkeling fins and why there are so many different styles and options. The way I see it, there is no real need for so many options. There are, of course, a reason for a few different variations in fin structures, such as full foot vs. open heel or long fins vs. short fins, but a lot of it comes down to marketing, I think, particularly when the fins look like something you’d take to the moon. So, with that in mind. Lets dive (pun absolutely intended) right into the different types of fins so you can choose the best fit for you.

This is one of the first decisions you need to make when you’re buying fins. Do you want an open feel fin, the ones with the straps that generally require you to wear a neoprene bootie? Or, do you want a full foot fin where you either wear the fin without anything or maybe a pair or lycra socks for added comfort?

The open heel option, particularly when it’s the kind that requires a neoprene bootie, are aimed at people who do a lot of snorkeling from shorelines where you’d need to walk over uncomfortable terrain before you could put your fins on. The full foot option is aimed more at those that spend their time snorkeling from a boat or a pier. Since nearly all of our trips are based at resorts with piers or from liveaboards that drop us on the reefs from a smaller boat, myself and all of the other snorkeling guides use the full foot fin option. A lot of people using the full foot fin option will also wear a lycra sock  to protect their toes and ankles from any blisters that may occur. Something else to note is that many models of fins will have a full foot option as well as an open heel option.

I like to think of fin lengths like bike gears on flat ground. On a bike, you have that super low gear that really moves you nowhere despite the fact that your pedals are moving at an incredible RPM and you’re absolutely exhausting yourself. Similarly, you have the high gears that do move you further without as many pedal rotations but the effort to a single rotation on the pedal takes a considerable effort. Fins work in a similar way, small fins are very easy to kick with but they really don’t help anytime you need to move long distances. Long fins, like free-diving fins, are great for moving long distances but do require quite a bit of effort to move them. 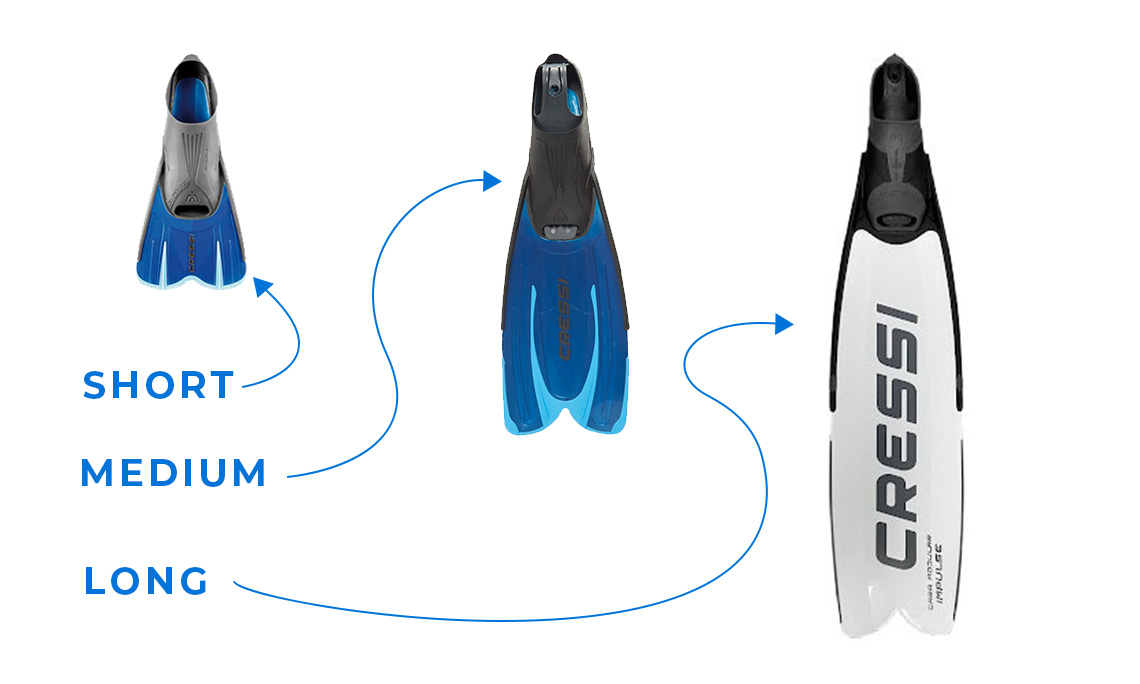 Just like a nice single speed bike that’s set up for easily cruising around flat ground, I always suggest to our guests they opt for a nice medium length fin that’s great for casually cruising around the shallows, but does have some power to them just in case you need to get somewhere quickly.

We had a couple trips recently in Raja Amapt where there were a bunch of mantas feeding on the surface. Because their food—plankton—was moving around quite quite a bit so were the mantas, and so were we. It was the people with the regular sized fins who could better match the pace of the mantas while the people with shorter fins were bringing up the rear (with a guide of course) and also getting quite tired as they were using considerably more effort to move the same distances.

Yes, those super short fins are very easy to pack, but a nice medium length fin will still fit very easily into a standard checked luggage suitcase and serve you better while you’re in the water!

If you look at a dolphin’s or a whale’s tale there’s not a whole lot to it, just a big paddle essentially. That’s what you want to keep in mind when you’re looking at the different types of fins. As you look at fins you’ll no doubt see fins with a bit split down the middle of them, others have weird rubber hinges or big holes in the blade. All that is is marketing. Split fins just allow water to pass through the two blades, which,  in my mind, is a pretty significant design flaw as the basic idea behind a fin is to push water as a means of propulsion. The ones with hinges and other more flamboyant designs might look cool and have some ultra scientific rationale for this “revolutionary design,” but at the end of the day these things usually end up being a weak point in the fin, and in my experience, the point where the fin ultimately breaks and you’re stuck using the rental fins.

Ultimately, the best fins, in my opinion, are the ones that have the most simple design, are a suitable length for you to snorkel in comfortably, and suit the type of snorkeling you typically do—from the shore or from a boat or pier. A good pair of fins that will last you years should not cost more than $100.

Alex Lindbloom
Alex is a Snorkel Venture and Dive Safari Asia guide as well as the video and photo pros for both companies. Alex is also a field editor for a popular underwater photography magazine. Prior to joining Snorkel Venture in 2018 Alex lived and worked all over the world working as an underwater cameraman, with five of those years living/working on a yacht in Indonesia. Alex's images and videos have garnered many international awards such as Underwater Photographer of the Year and can be seen on NatGeo, Discovery Channel, the UN Building, and various magazines.
Previous postThe Art of Combining Trips
Next postThe Problem with Video Lights and Flashes for Snorkelers