There’s a lot of chatter out there about underwater cameras, people—especially camera people— have very strong opinions on this particular subject and will readily share their opinions with you about which camera is best because of this reason and which one is “totally unusable” for that reason, whether you asked for it or not. These opinions—which are often conveyed as facts—seem to only get more in your face as you move up from compact cameras to larger mirrorless and DSLR cameras. This is very annoying and off-putting, especially if you are new to underwater photography, or just photography in general, and are just looking for an affordable camera that’s easy to pack in your reasonably sized suitcase and is going to take a decent underwater photo on your snorkeling adventure. There’s a saying—which is absolutely 100% correct and has the peer-reviewed credentials to prove it—that goes a little something like this, “the best camera is the one you have with you.” Basically, there’s no one camera that’s perfect, all cameras have their strengths and weaknesses, and knowing what they allow us to get the most out of your camera. So, with that in mind, let’s just talk about some of the cameras we have with us, and by that I mean three of the most common cameras snorkelers are more likely to use and discuss the strengths and weaknesses of each to help you make a better decision on your camera purchase. 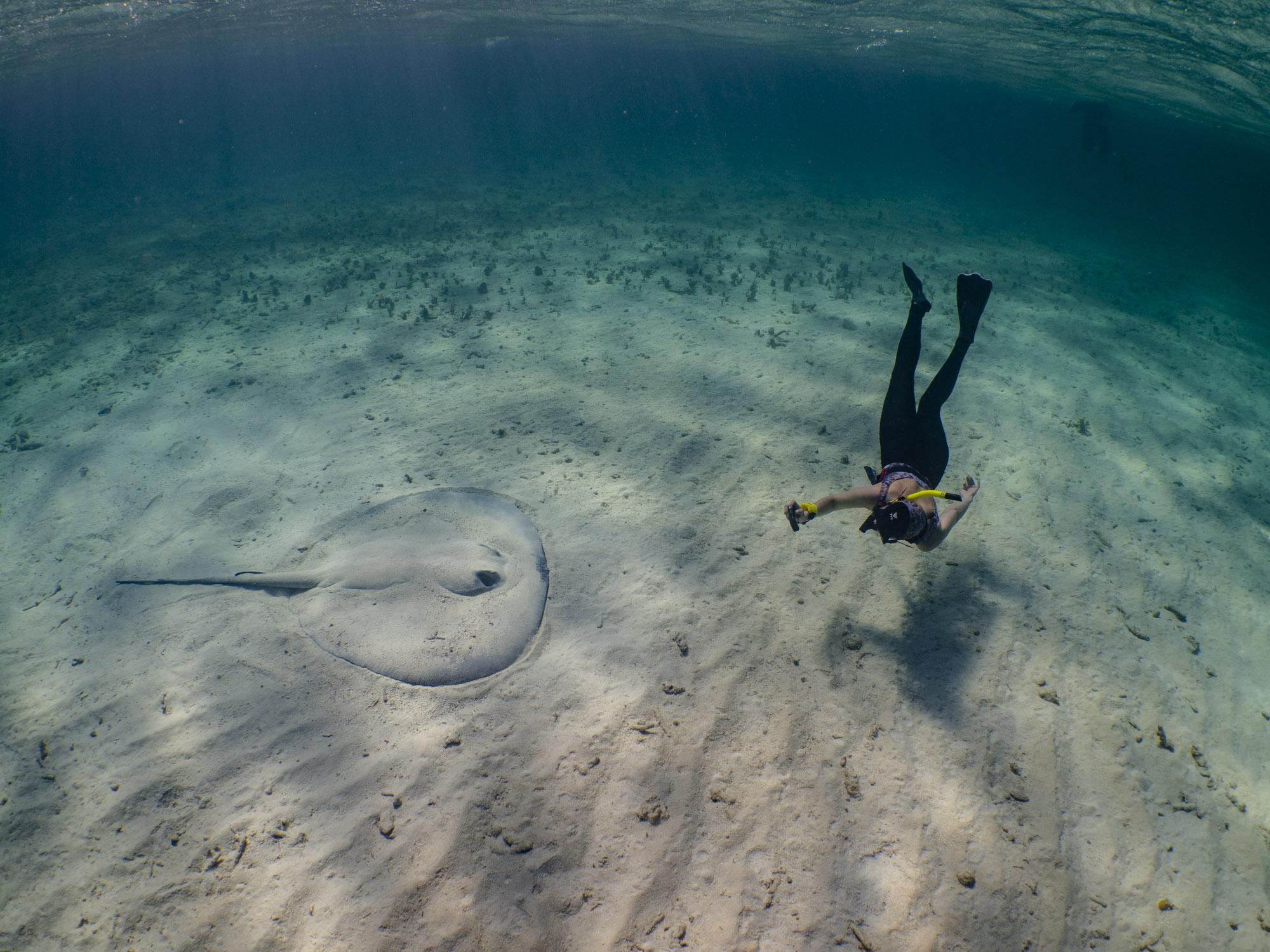 The GoPro is a solid camera choice and one we see a lot of on our snorkeling safaris. They are reasonably affordable as far as cameras go, and have some seriously high-end specs, particularly where video is concerned. They are also very durable and is waterproof right out of the box which is a major bonus. That being said, I’d still get the housing for it as an extra precaution against water and accidental droppage. 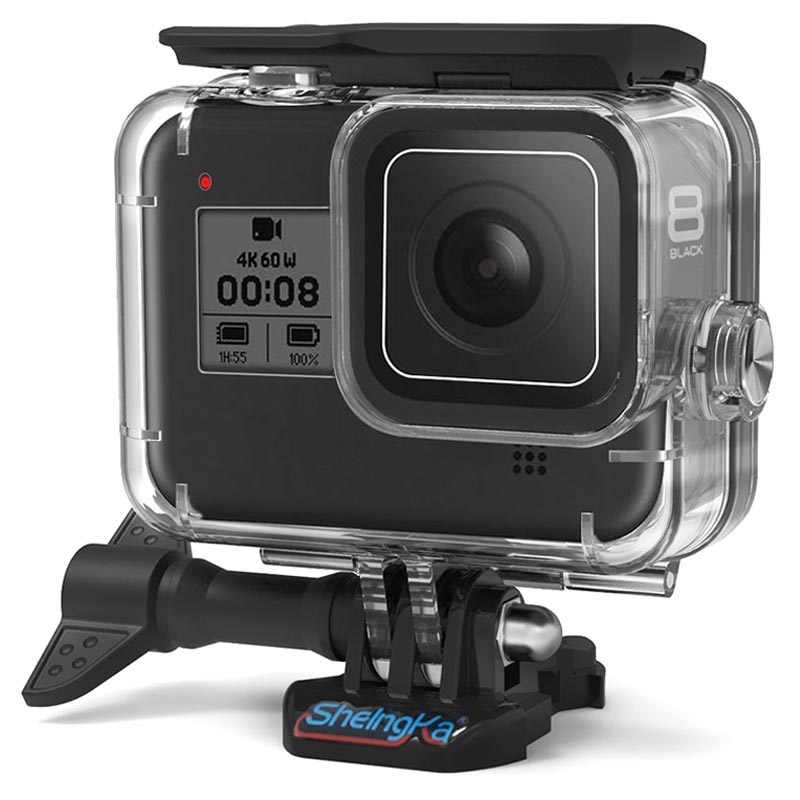 While the GoPro does take some nice photos, it’s definitely geared more towards those that are more interested in filming but would still like to take a photo here and there. Something else that’s great about the GoPro cameras is the wide-angle lens that works amazingly for capturing schools of fish, reefscapes, and other big animals like mantas and turtles. It’s definitely not a great camera for shooting small things like nudibranchs or crabs and shrimps because of this wide-angle lens. Finlay, one of the other great things about this camera is its ability to color-correct underwater for images full of great natural colors and not just shades of blue and green.

I’ll be honest, I don’t see a lot of smartphones being taken underwater on our snorkeling safaris, maybe just one or two, but we recently did a snorkeling safari to Mexico, and one of our guests, Gert Walter was really pleased with the results from his iPhone 12 Max, and I wanted to share his thoughts and some of his images. In terms of practicality, using a smartphone as your underwater camera is really one of the most ideal situations. New smartphones have pretty amazing camera specs for both videos and photos, not to mention the ultra-wide angle lens many of the newer ones have when you switch it into .5x zoom. Then there’s the added convenience that all your photos and videos are already on your camera, no need to download the images and then transfer to your phone. 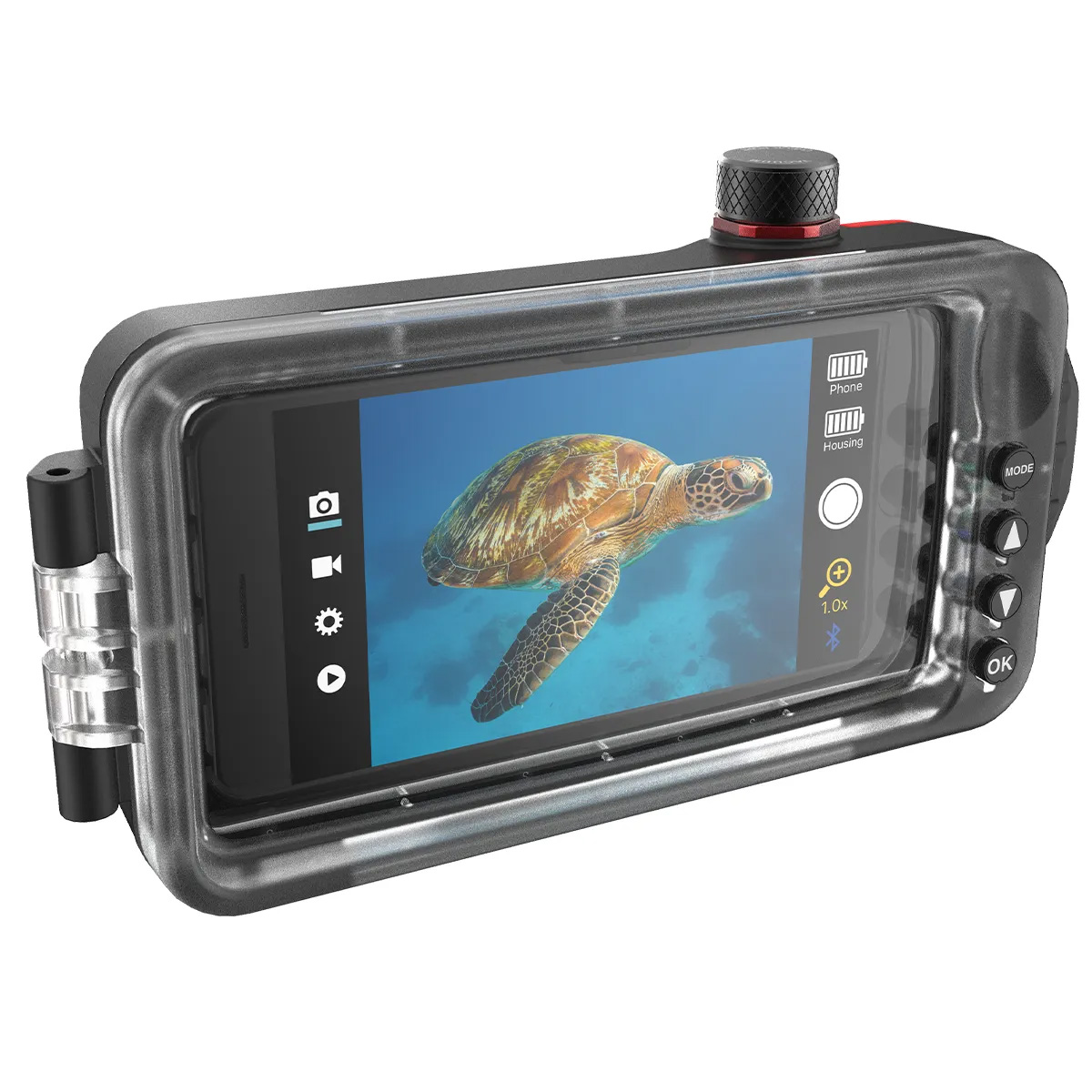 One of the big things to invest in if you are thinking of using your smartphone is a housing, even though many of the new smartphones are waterproof. Gert was using a housing he bought off Amazon for about $55.00 and it looks like a pretty solid housing. There are of course many other types of housings for smartphones that range from a sort of heavy-duty plastic bag (please don’t), to more professional-quality enclosures made out of aluminum or sturdy plastics. Please take into consideration that smartphones are operated through their touch screens and some housings don’t allow you to use the touch screen outside of one or two-button to toggle the shutter. This means you have to have your phone set up, unlocked, and in the camera mode before you put it in the housing. Gert’s housing is meant to allow access to the touch screen, and it sounds like he was able to, but he had to press pretty hard just to be able to do so.

“Occasionally you have to push this several times on the iPhone. A firm push is best, not a tap. Using two fingers to zoom in and out does not work consistently underwater but pushing on the photo or video icon selects the correct one.”

Now, one really big thing to consider with the smartphone option is that smartphones are pretty essential to our daily lives, particularly when we are traveling. All of the new QR codes we need are stored on them along with our flight tickets and traveling apps, not to mention all the other photos, passwords, and Tinder profiles! If your housing just happens to flood and the saltwater permanently damages your phone, you have lost something far more important than just a camera. I’m not saying the smartphone option is a bad option at all, I’m just saying there’s a bit more to risk when taking it underwater, that’s all. 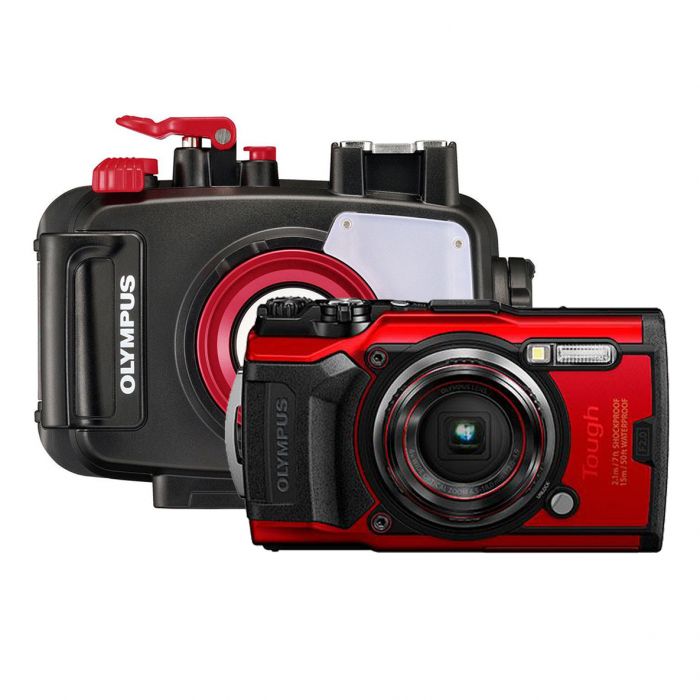 The Olympus TG-6—or Oly TG-6 if you want to sound really cool—is by far the most popular camera on our snorkeling safaris. This camera is in a lot of way like the GoPro, except it’s geared towards people who are more interested in still photos rather than video. It still does do video, quite well I might add, but its underwater photo abilities are what it’s best known for. Like the GoPro, it’s reasonably priced as far as cameras go and is pretty much ready to go out of the box. It’s waterproof—though I’d suggest getting the housing for it as an added precaution—and it has some pretty amazing underwater shooting modes that really bring out the natural colors of the reef. Its lens is not as wide as the GoPro’s or a smartphone’s set to .5x, but there are some aftermarket lenses that you can get for a reasonable price if you really like wide-angle. That being said, if you prefer to focus on reef fish as your main subject, the lens is perfect for that and also has a great optical zoom and macro/super macro modes. One thing I really appreciate about the TG-6 is that it’s great for beginners right out of the box, but if decide you want to take your underwater photography a bit more seriously there’s a lot of room for that with this camera with just a couple aftermarket purchases like flashes or video lights, lenses, and different housings.

Alex Lindbloom
Alex is a Snorkel Venture and Dive Safari Asia guide as well as the video and photo pros for both companies. Alex is also a field editor for a popular underwater photography magazine. Prior to joining Snorkel Venture in 2018 Alex lived and worked all over the world working as an underwater cameraman, with five of those years living/working on a yacht in Indonesia. Alex's images and videos have garnered many international awards such as Underwater Photographer of the Year and can be seen on NatGeo, Discovery Channel, the UN Building, and various magazines.
Previous postIndonesia is Open!
Next postUnderwater Camera Accessories for the Olympus TG-6