In late November of 2021, I had the pleasure of being able to visit a brand new snorkel and dive resort in Indonesia called Kusu Island Resort in southern Halmahera. Halmahera, if you’re wondering, is the large odd-shaped island just west of the Raja Ampat area. I was visiting Kusu Island Resort for two reasons, the first was to check it out as a potential resort to run our snorkeling safaris through, and the second was to produce some promotional content for the new resort. As Kusu Island Resort is not 100% open to the public yet because of the seriously annoying restrictions to still in place for foreigners visiting Indonesia, I was the only “guest” and had the whole place to myself for two full weeks. Yes, my job has some serious perks! Anyway, my time was not spent lounging around, quite the opposite actually. I used every bit of daylight and a good portion of the night to explore as much of the reefs and resort as possible to make sure everything is “up to snuff.” Here’s what I found. 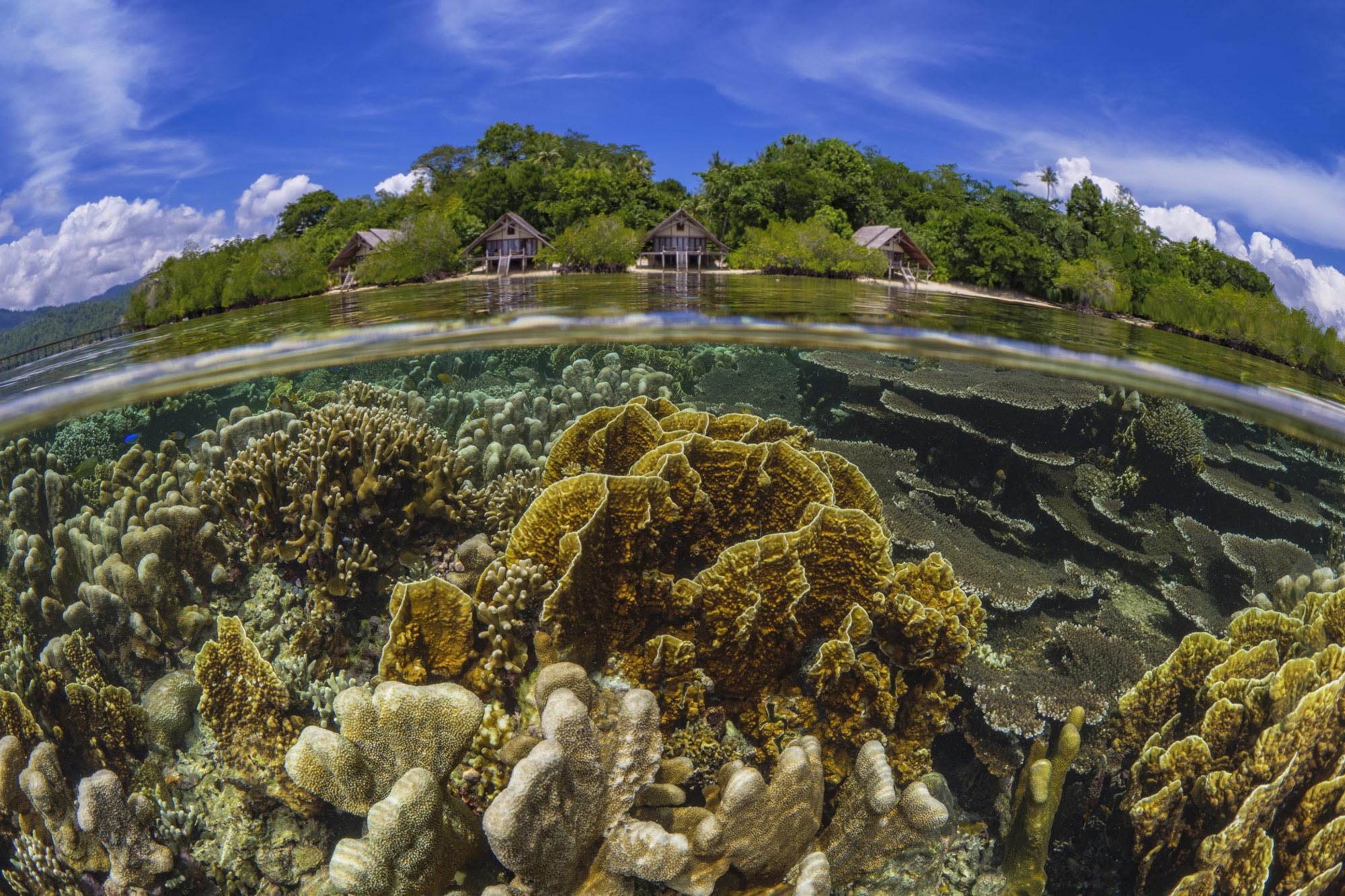 Upon landing at the Labuha airport on the island of Bacan (pronounced Bachan), just off the southwest corner of Halmahera you’ll be met by a member of the Kusu Island Resort team and taken to the nearby port where you’ll jump into the resort’s comfortable speedboat and driven about thirty minutes to Kusu Island, where the resort is, obviously. The resort has been incorporated into the island in a very natural way and the only evidence you’ll see of the resort, in the beginning, is a long—beautifully built pier that extends from the mangroves and ends where the reef drops off into the blue. It’s only when the boat is parking on the wooden pier that you’ll start to see several of the unique a-frame villas built right over the water and nestled between large clumps of mangrove trees. 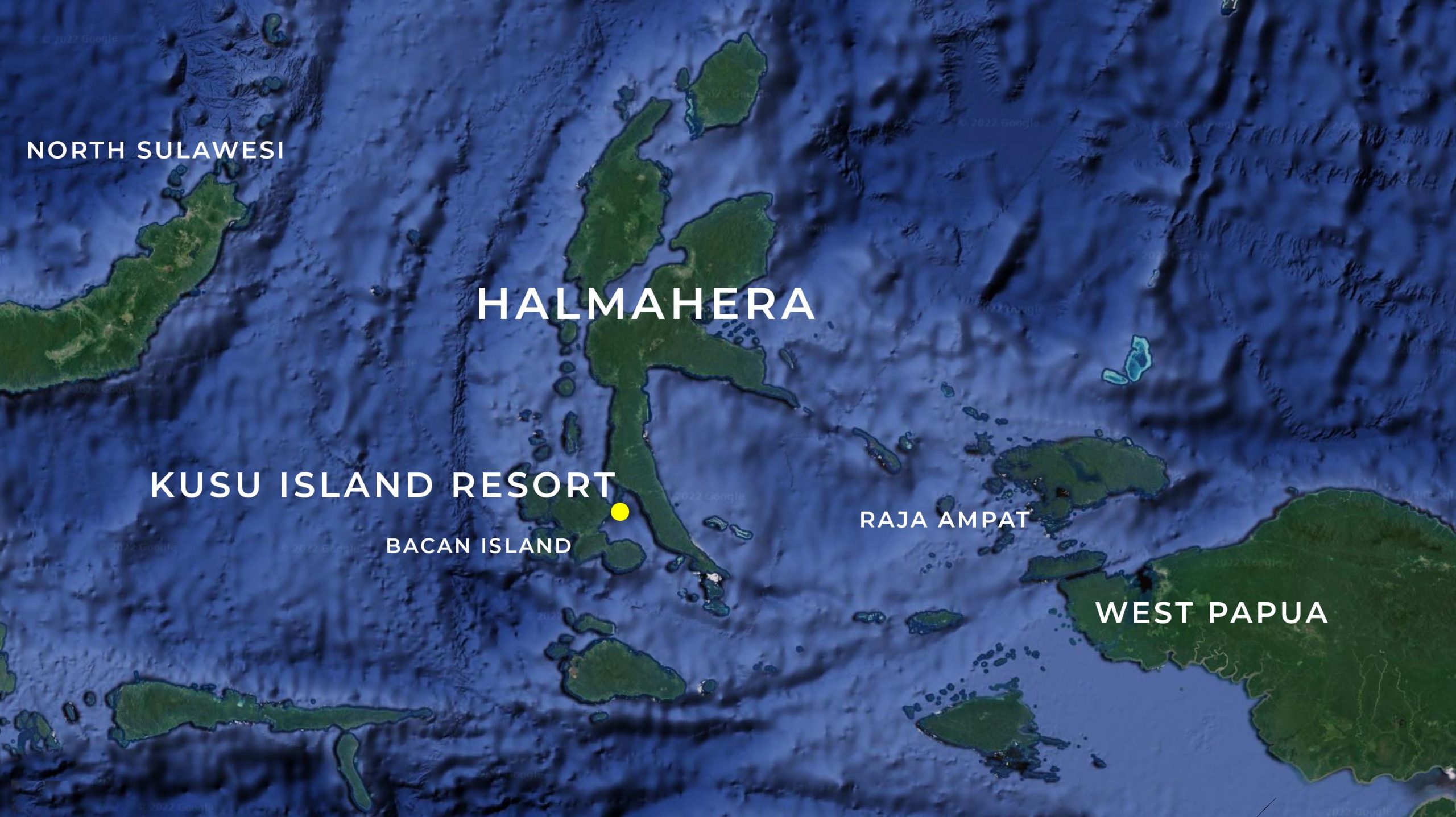 The resort area occupies the southern portion of Kusu island and includes a white sandy beach, mangroves, a manicured pathway through the jungle which connects the resort’s water sports center next to the pier with all the villas and the restaurant. The resort also has a beautiful natural lagoon complete with a sort of “blue hole” as well as a trail that leads to a light trek around the island.  Oh, and just off the shore is a stunning hard coral reef that surrounds the entire island! 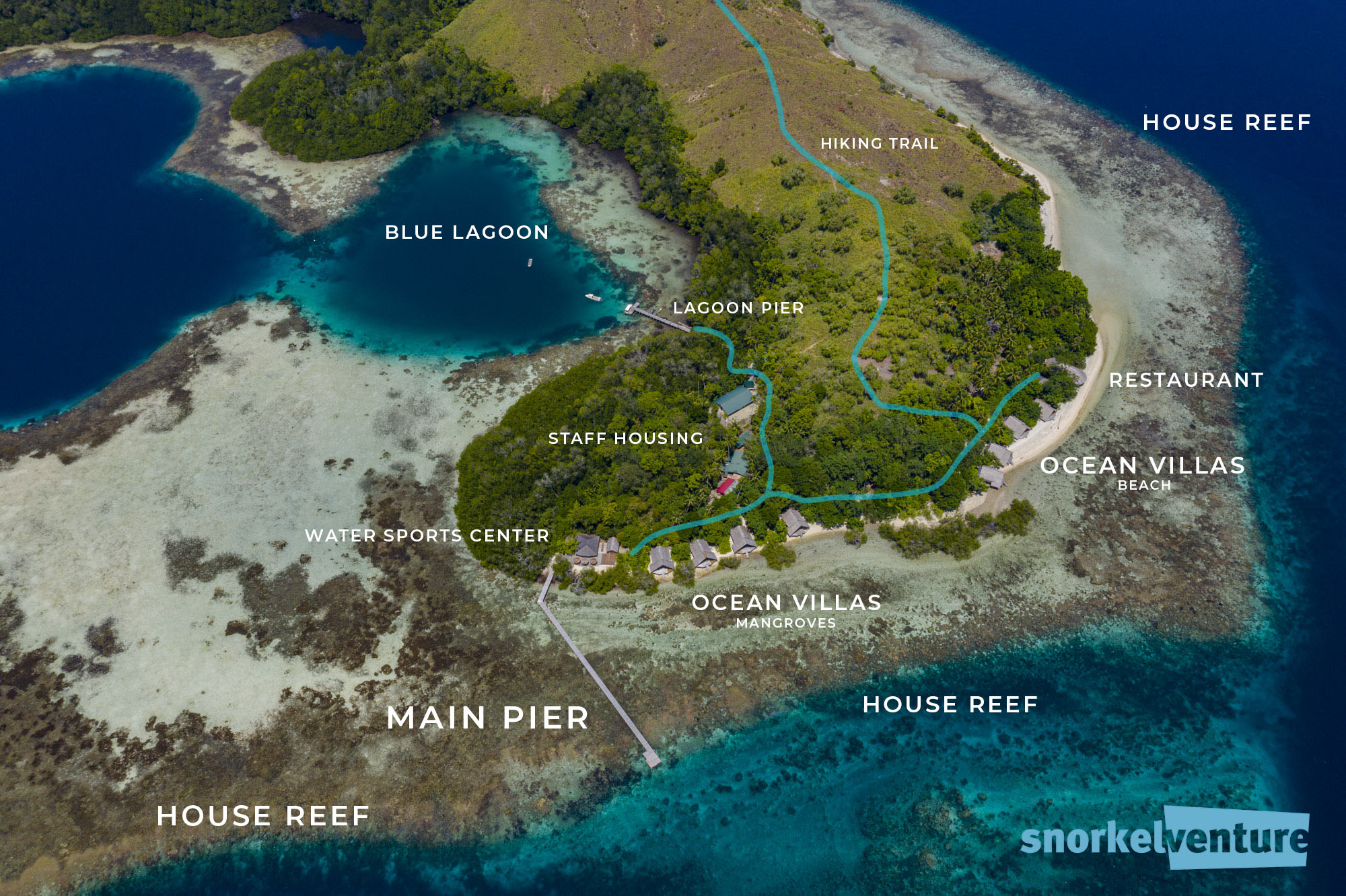 At the moment there are eight villas with near-identical layouts. Four are built right over the water with mangroves on either side of each, and the other fours are just around the corner and run along the white sand beach. All the villas feature a large porch with a set of stairs leading to the beach or right into the water. Each porch is equipped with a pair of sun loungers, a coffee table, and even a really clever and surprisingly comfortable wooden hammock built right into the porch’s floor. There’s also a freshwater shower on each porch in case you decide to go for a quick dip and want to rinse off after. 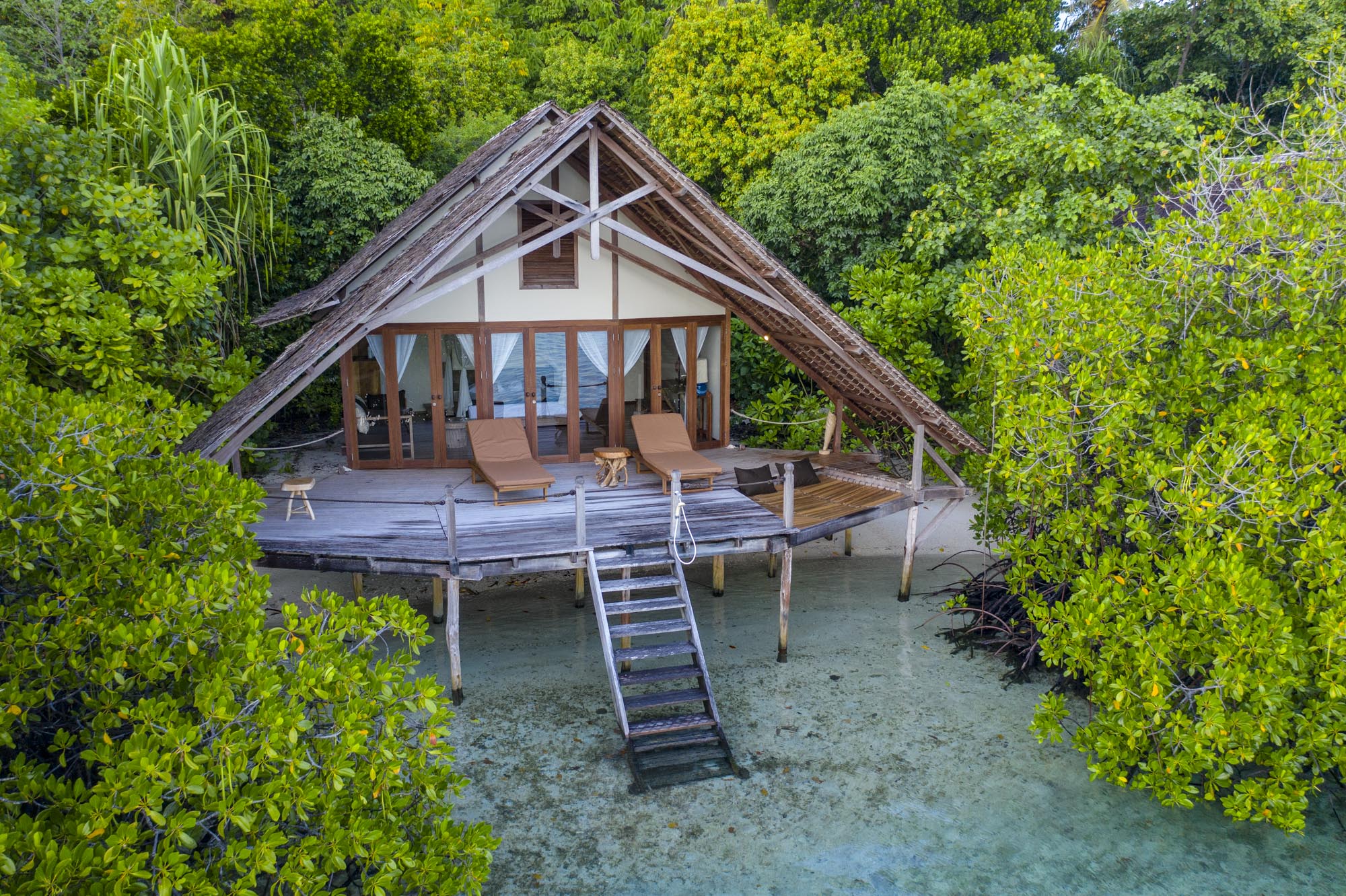 Inside each villa you’ll find a large comfortable bed, a big sofa and coffee table, a wardrobe with ample storage, and a long wooden desk. Each villa has its own ensuite bathroom which features a stunning open-air shower made out of driftwood that looks right up at the jungle canopy above. One of the cool things about the villas, or the resort as a whole, is the woodwork. No detail was too small for the owners and nearly everything is hand-made right on the island and a lot of it is made from pieces of wood found washed up on the beach. If you appreciate good woodwork, the craftsmanship of this resort will give you something else to explore outside the beautiful reefs, islands, food, and beaches. 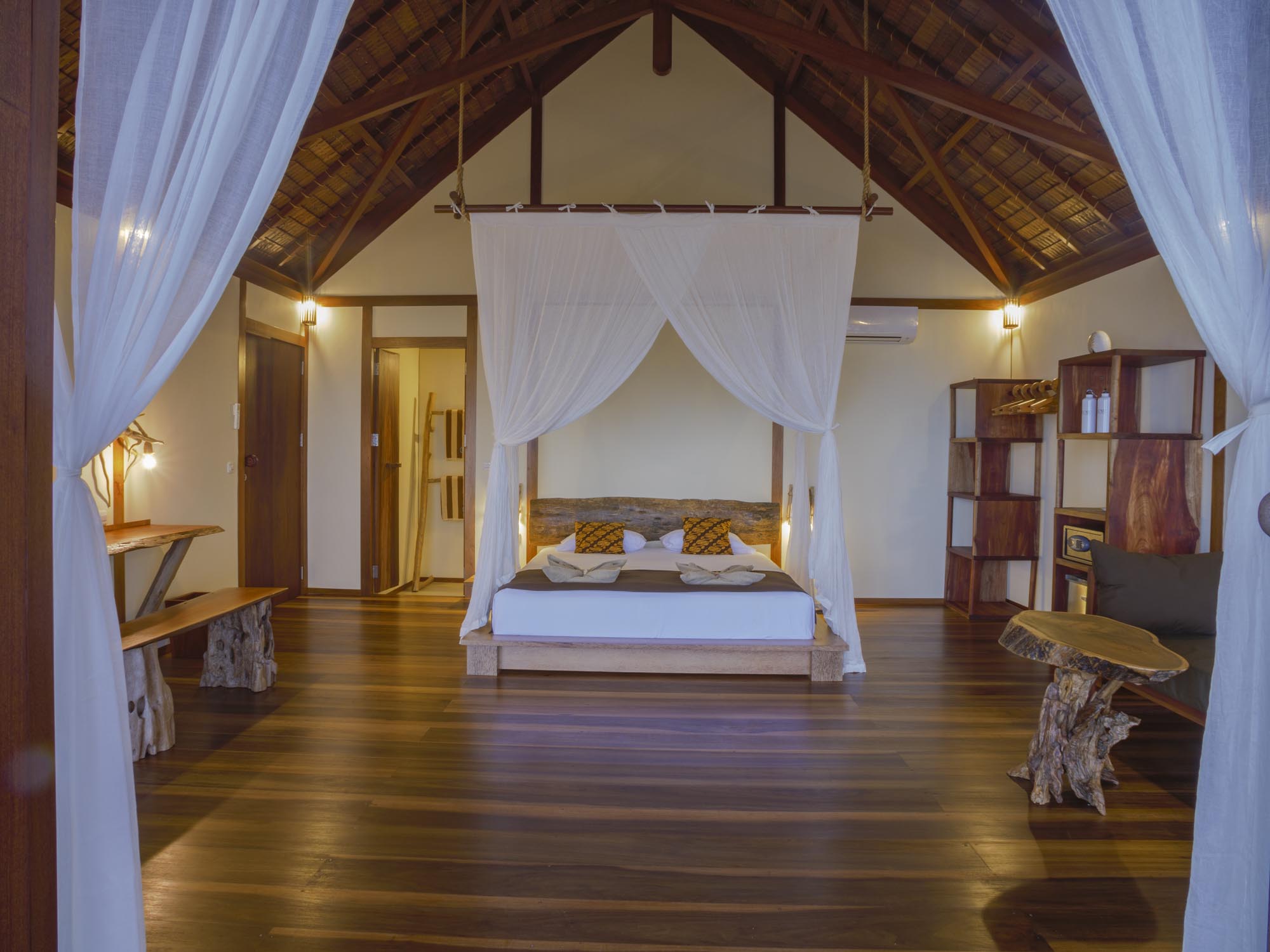 Kusu Island Resort also feature’s it’s own restaurant which is also built right at the waters edge and has a breathtaking view of the sea. Unless you want your meal delivered to your room, this is where all the meals will be served. This area also functions as a sort of lounge area as well where you can meet up for evening drinks or just relax with a book.

The water sports center is at the other end of the resort’s grounds and like everything else at the resort, it’s beautifully made with a lot of thought into every little detail. There are two buildings here with one of them being a secure gear storage area where everyone has their own gear locker. In the other building you have an air-conditioned camera room where everyone can keep and charge their cameras without cluttering up their own villas with camera bits and cables. Outside of this room is a sort of mini-bar/living room area where you can enjoy freshly prepared juices, ice water, or even sip on a chilled coconut straight from the tree between snorkel sessions. 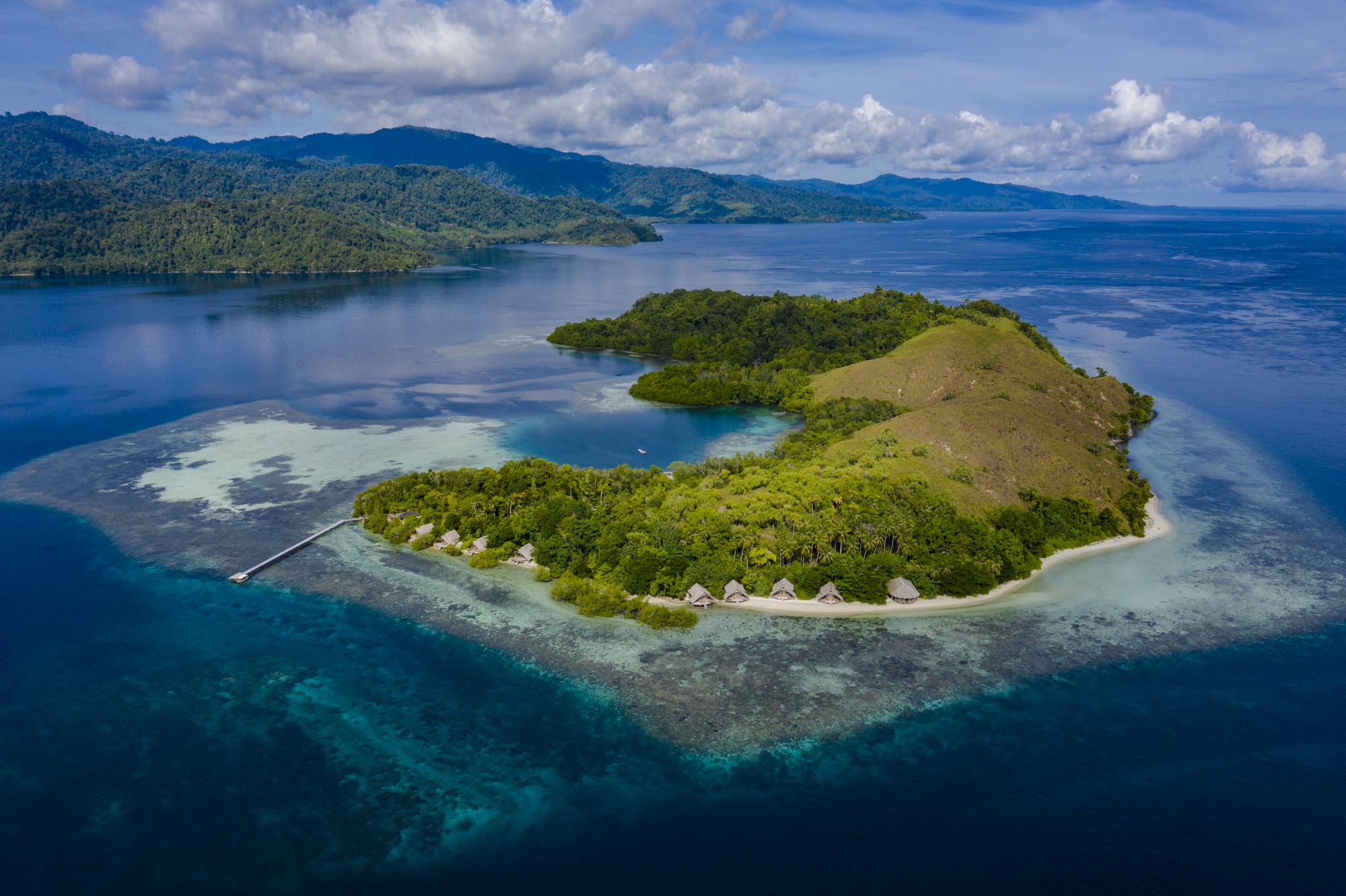 The snorkeling here really is quite amazing, and you really don’t need to go far to get to the area’s best reefs as Kusu island is well situated. The average time spent moving from one reef to another was anywhere from five minutes to about twenty. 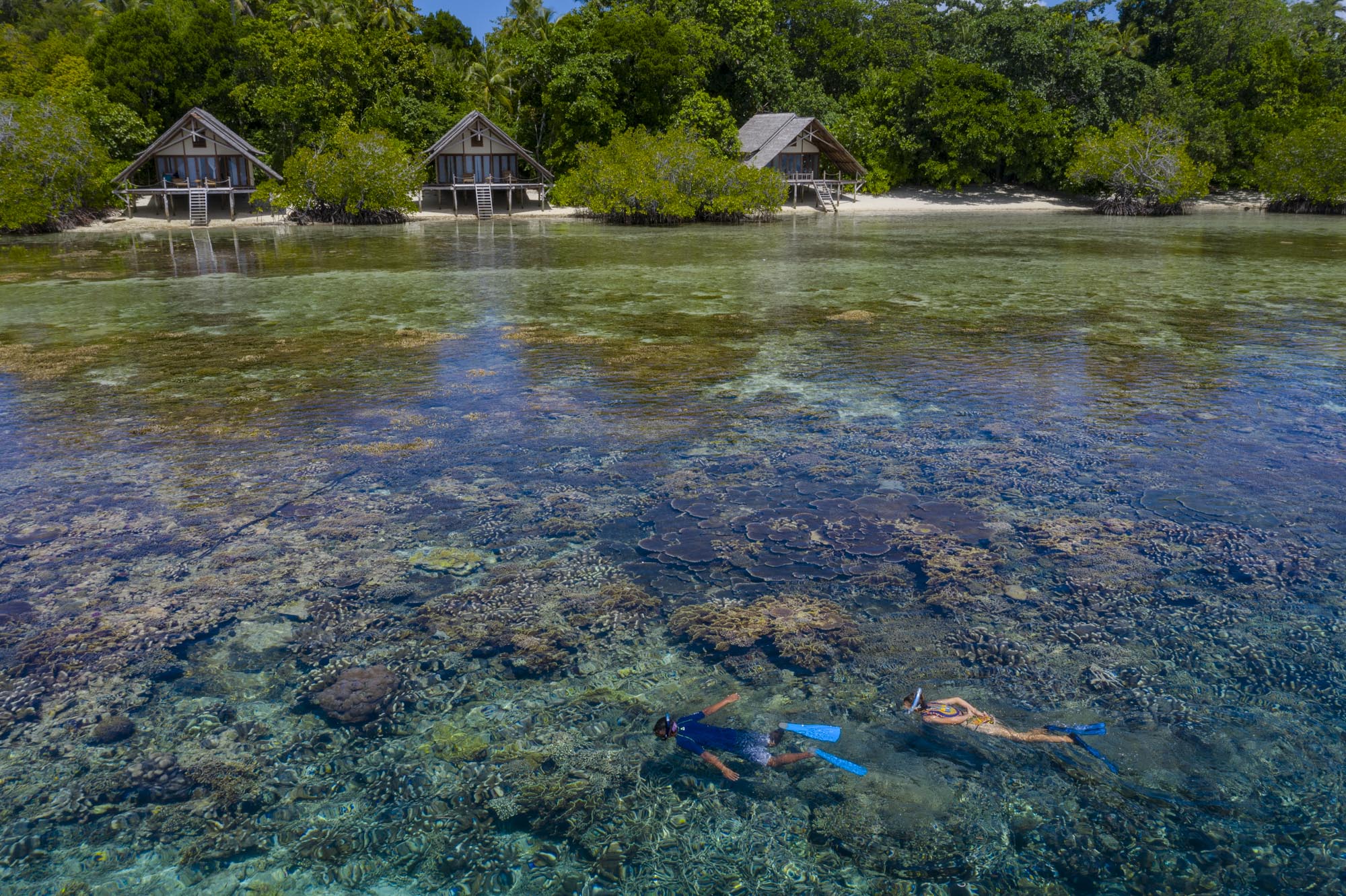 One of my favorite reefs though was the house reef which is obvously very close to the resort and at high tide accessible from your villa steps! The house reef extends from the end of the pier in either direction and basically just wraps around the island. The reef is mostly made up of a vast mixture of hard corals that go from the surface and forms a sort of plateau and eventually starts to slope away as you get further from the island. I did a ton of snorkeling on this reef, both from the pier and also with the aid of the boat so I could just keep going and going and not have to worry about swimming back to the pier. 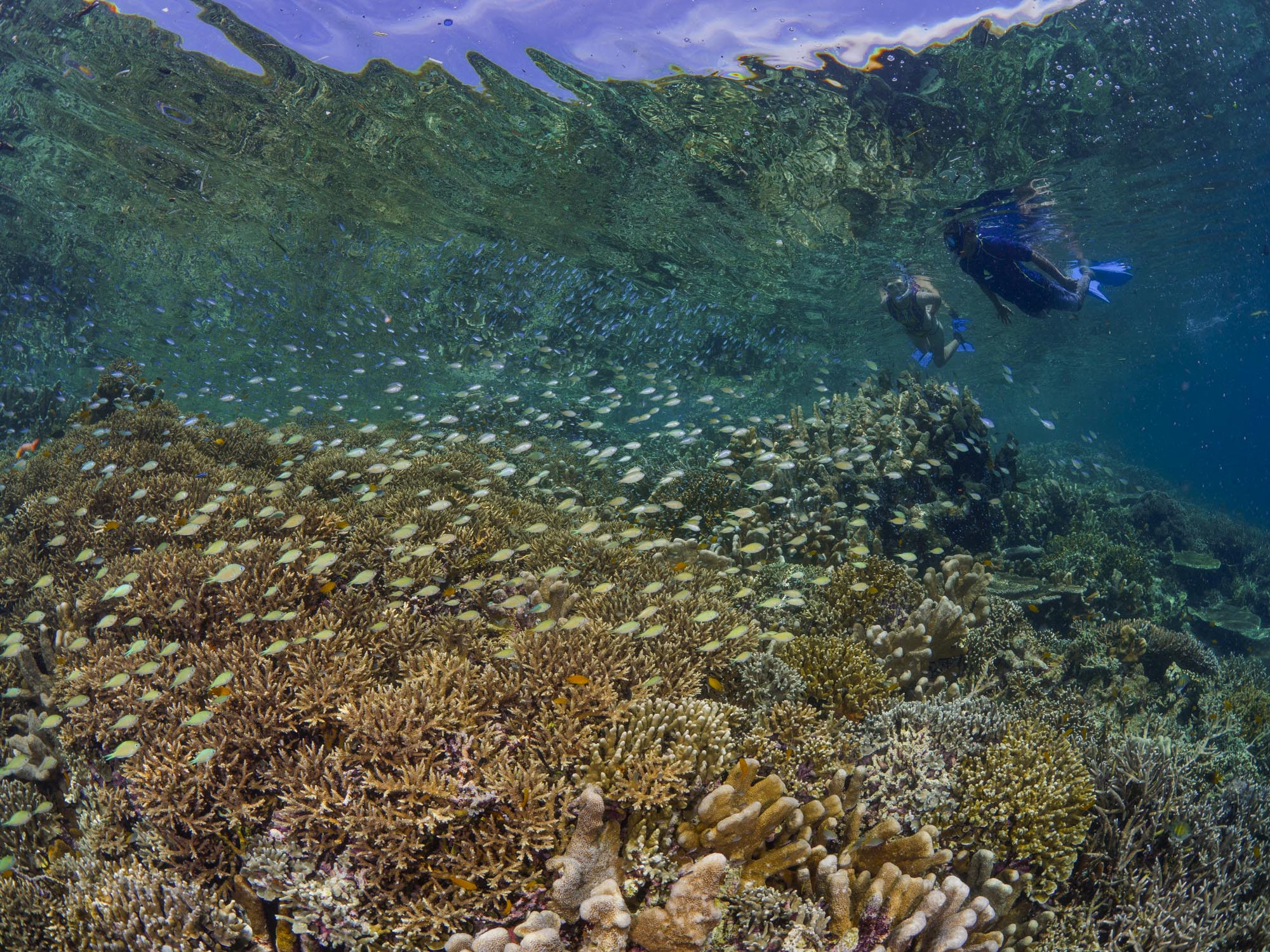 While I did spend a good deal of time enjoying the house reef, I did do a lot of exploratory trips to the other nearby islands with the help of the resort’s snorkeling guide and speedboat. Since most of the area has only just recently emerged as a new snorkel and dive destination, it really hasn’t been explored the way places like Raja Ampat or Komodo have. Not only that, but most of the underwater exploration that has been done has been with divers in mind. Since we all know that what might be a good site for a diver doesn’t really mean it will be good for a snorkeler, I spent a significant portion of my time sprint swimming over large sections of reef that either looked good from the drone or were known dive sites to make sure that they ticked all the boxes for snorkelers as well, which just about all of them did. I’m also really happy to say that in all our time zipping around by boat, sending out the drone for aerial reef reconnaissance missions, and plenty of good old fashioned swimming, we found some entirely new reefs which are more than perfect for snorkeling, one of which was very possibly the most beautiful reef I’ve ever seen and took the liberty of naming it “Montse’s Garden” after my fiance. Boom, brownie points! 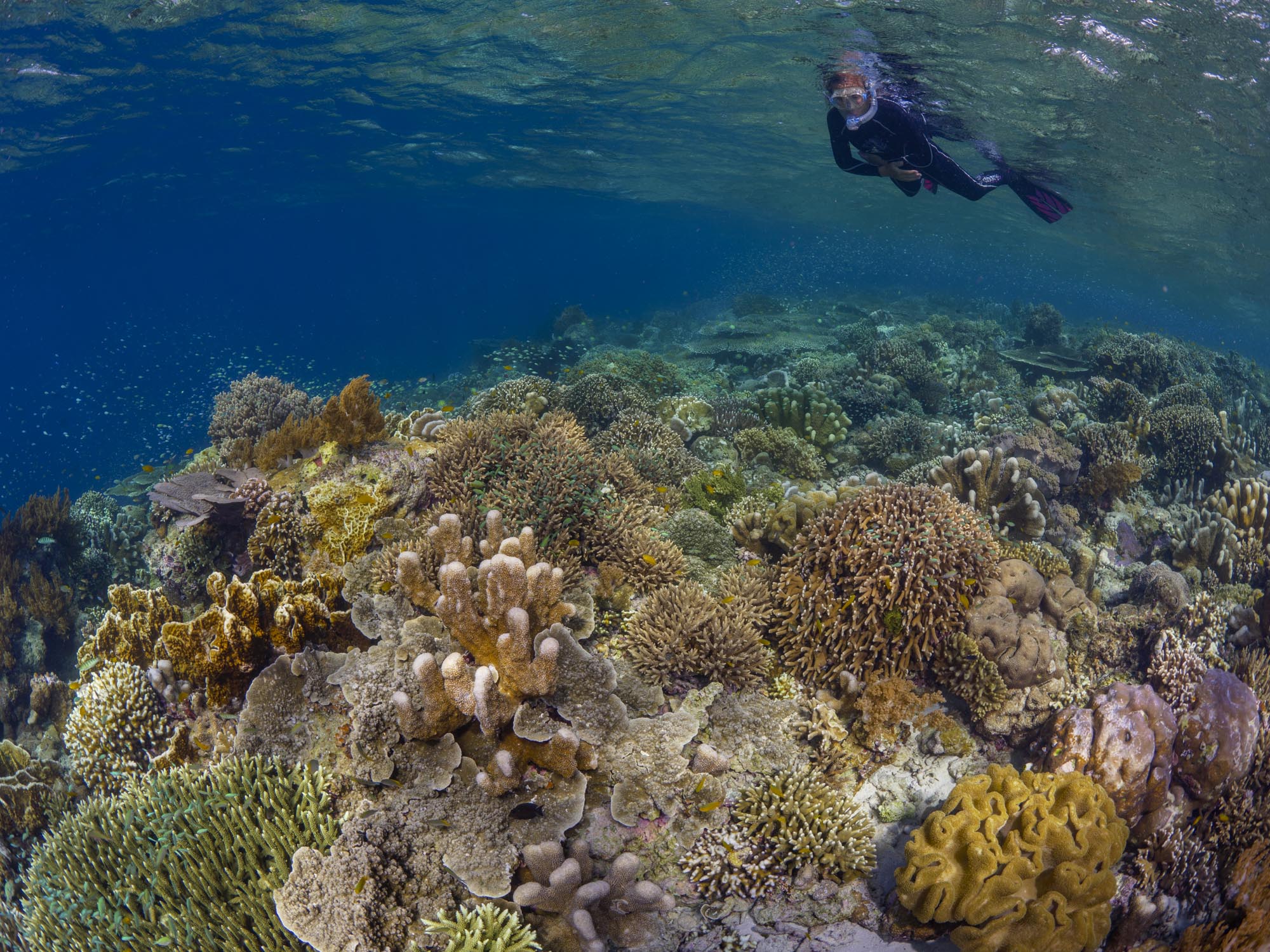 So, what are the reefs like? Short answer, amazing! Long answer—aside from one very long and very shallow coral-covered sea-mound, most are fringing reefs that extend from the shoreline and very gradually start to slope away from the island before either turning into really interesting walls or steep slopes. The reefs are very snorkel friendly in that they are very shallow, so much so that at very low tides around full or new moon large portions of the reefs can be completely out of the water. Like most shallow reefs in Indonesia, they are predominantly hard coral with some large sea fans, sponges, and brightly colored soft corals mixed in. 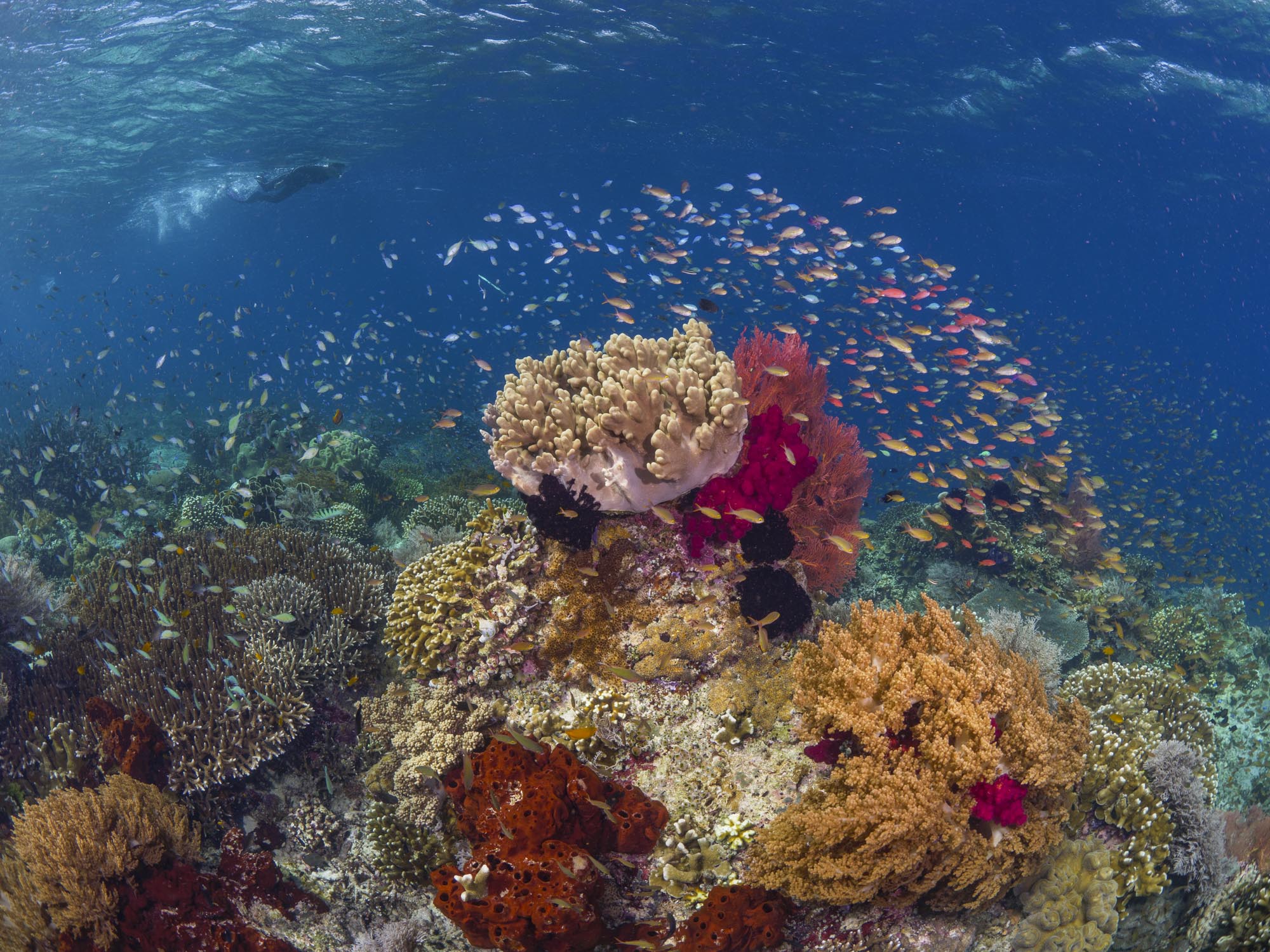 In terms of marine life, there’s no telling what you’ll find. As the area is so close to Raja Ampat you have the same or very near the same level of biodiversity, which is a lot, to say the least. The reefs just pulse with life and color. One of the things I found most stunning about snorkeling around Halmahera was the sheer volume of little reef fish like chromis, basslets, and athias which seemed to form clouds around the large coral heads. As a photographer, I love compositions like this! There are some larger fish like batfish, snappers, and sweet lips but they were all quite shy and usually hung out in the deep. From what I saw, Halmahera is very much a coral reef fish destination and for those of you that love the brilliant colors and the joy of searching for things like nudibranchs, crocodile fish, anemone fish, and ticking off all the different reef fish in the ID books, this is an ideal destination.

At the time of writing this, January 2022, we don’t have any dates set aside for a Kusu Island Resort snorkeling safari simply because Indonesia is still not open for tourists. As soon as it does, we will no doubt have one or several tours to this fantastic resort and it’s lovely reefs. Please stay tuned!

Alex Lindbloom
Alex is a Snorkel Venture and Dive Safari Asia guide as well as the video and photo pros for both companies. Alex is also a field editor for a popular underwater photography magazine. Prior to joining Snorkel Venture in 2018 Alex lived and worked all over the world working as an underwater cameraman, with five of those years living/working on a yacht in Indonesia. Alex's images and videos have garnered many international awards such as Underwater Photographer of the Year and can be seen on NatGeo, Discovery Channel, the UN Building, and various magazines.
Previous postHow to Control Seasickness
Next postTransportation in Indonesia