Alor is one of Indonesia’s newest snorkeling destinations and is quickly becoming one of the top places to snorkel in the world. Alor is actually just one island—the largest, within a small regency known as the Alor Regency and is made up of twenty islands in the far eastern corner of Indonesia. Like many of the islands in this part of Indonesia, the landscape is volcanic—with several of the dormant conical peaks clearly visible from the horizon.

The most iconic volcano in Alor is Pura, and sits just outside Kalabahi bay between the island of Alor and Pantar. This dormant volcano is where a lot of the area’s best snorkeling sites are located and where we concentrate our time on our Alor snorkeling safaris. There is one airport that services the Alor Regency and it’s located on the northwest tip of Alor Island and is just forty-five minutes by car to the resort that always hosts us, Alami Alor.

The snorkeling in Alor is truly exquisite and offers a seemingly endless variety of stunning coral reef vistas and marine life encounters.

Within the area just outside Kalabahi bay, we have a large variety of types of snorkeling sites, from vibrant walls that drop of into the deep blue water to vast coral plateaus, reefs made up almost entirely of sea anemones, village piers completely encrusted with soft coral and sea fans, to gentle drifts over beautiful sloping reefs where the village children will often swim along with you in their home-made wooden goggles posing for photos. Then there’s the house reef in front of Alami Alor, which has so much to offer despite just being a few steps from your bungalow.

One of the key things that make Alor such a unique place to snorkel is the genuine and unplanned interactions we are able to have with the residents of the Alor area. The small local communities that inhabit the islands around Alor are very traditional, with most of the villagers going about their lives just as they have for hundreds of years. The majority of the communities here are almost completely dependent on what they can harvest from the sea and have developed and have a number of very unique ways to fish sustainably.

Given our unique vantage point as snorkelers, we can watch first hand as the fishermen lower and raise their handmade bamboo fish traps from their small dug-out canoes, or even follow along as freediving spearfishermen geared up with nothing more than a home-made spear gun and wooden goggles dive down to incredible depths as they hunt for their next meal. What’s more, as a result of the local communities’ minimally impactful fishing methods and lack of large-scale development and tourism, the reefs and marine life are in a near-pristine state.

Much like Komodo, Alor is an area affected by stronger currents, and like Komodo, these currents are what give Alor such vibrant reefs and a robust concentration of marine life. Just like any of our snorkeling locations that can often have strong currents we take certain precautions so as to avoid certain sites when the current is running strong. All of the Snorkel Venture tour guides, as well as the guides from Alami Alor know how and when the currents are running, and how to best snorkel each site given the current situation.

In Alor, many of the sites are protected from current no matter how strong it is, while on other sites we actually use the current to push us along for a casual drift snorkel. On a Snorkel Venture snorkeling safari, the snorkel guides will always do an in-water current check before guests enter the water, as well as a full briefing with a map of the site and a full description of how we are going to either avoid the current or use it to our advantage. If we ever think the current is too strong for a particular site, we will move to a site that is better protected, there are plenty to choose from in Alor.

Alor has a dense concentration of marine life, big and small. While the area does have large schools of bigger fish like jacks, snappers, and batfish, they do tend to reside on the deeper portions of the reef and can be a bit out of reach of snorkelers. With that in mind, as snorkelers, we tend to concentrate our time on searching for those unique species that are quite common in Alor, like nudibranchs, frogfish, various species of scorpionfish, and a whole assortment of different kinds of anemonefish. Of course, as you snorkel along the reefs in search of these unique critters there is no shortage of colorful reef fish to gawk at as they completely inundate the reefs here. You will, most certainly at some point, find yourself engulfed in clouds of orange anthias and shimmering fleets of fusileers.

There are a few sites, however, where you are likely to have encounters with big fish, one being Alami Alor’s house reef. Just beneath the resort’s pier is a resident school of diamond spade fish—which are a very unique school of fish not often found on reefs, as well as batfish, and big-eye jacks. Also, right up in the shallows—just in front of bungalows, is a nursery for baby blacktip reef sharks.

Another big fish encounter that is possible in Alor, but is a little more tide and current dependent, are mola molas. These highly unusual fish who generally spend their time thousands of feet deep feeding on jellyfish will often come right up to the surface with the right conditions, and if we are able to spot their giant fins flapping around from the boat we stand a good chance of being able to snorkel alongside them. Finally, while it’s not likely to be an in-water encounter, it is very possible to have our snorkeling boats surrounded by a superpod of dolphins and melon head whales which can be several hundred strong. 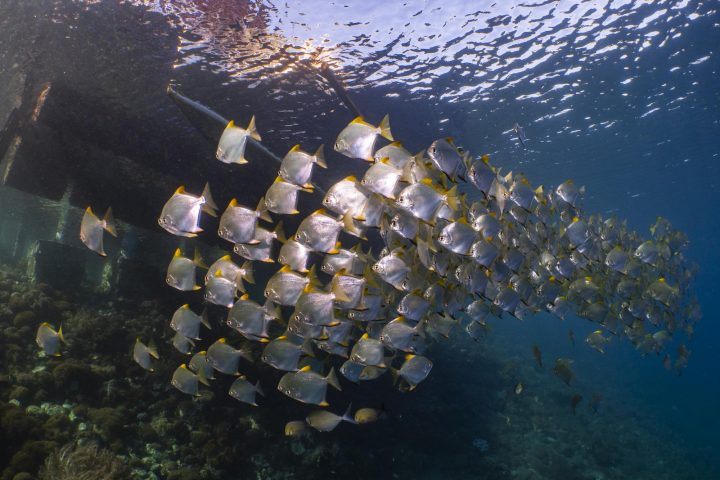 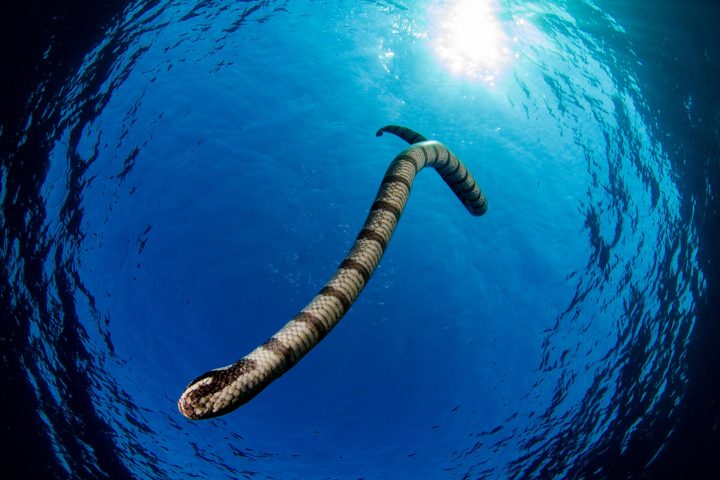 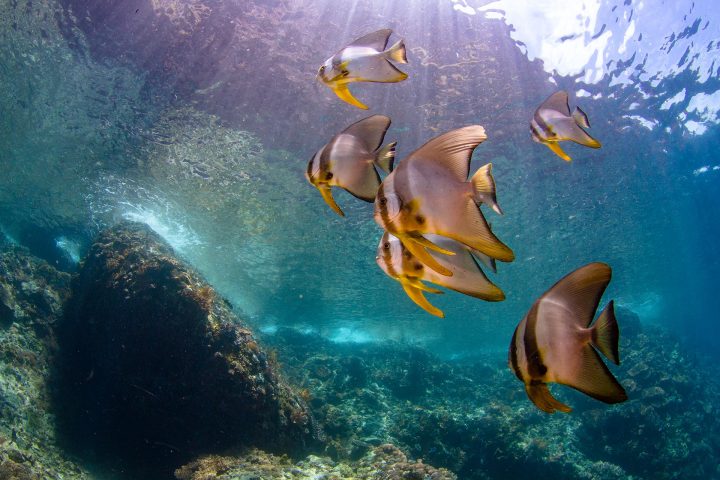 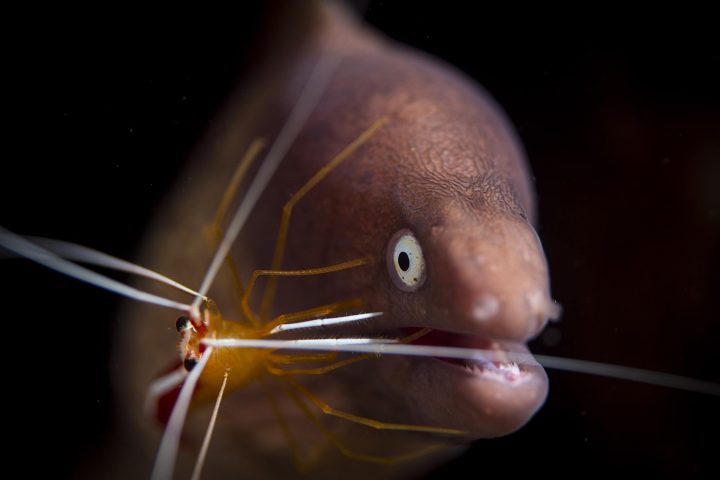 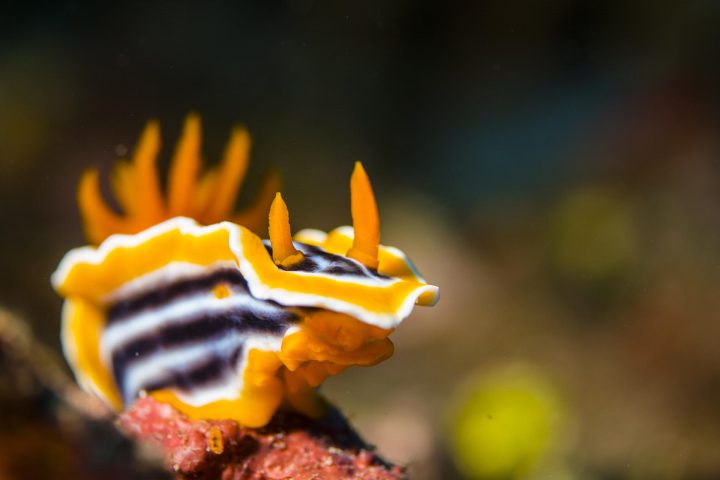 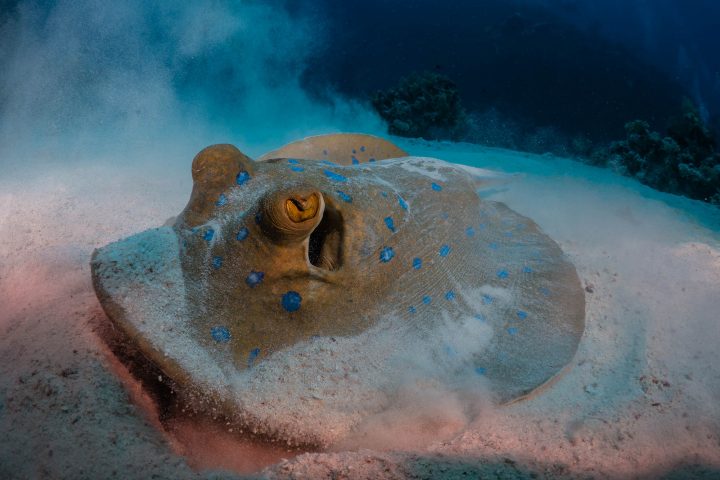 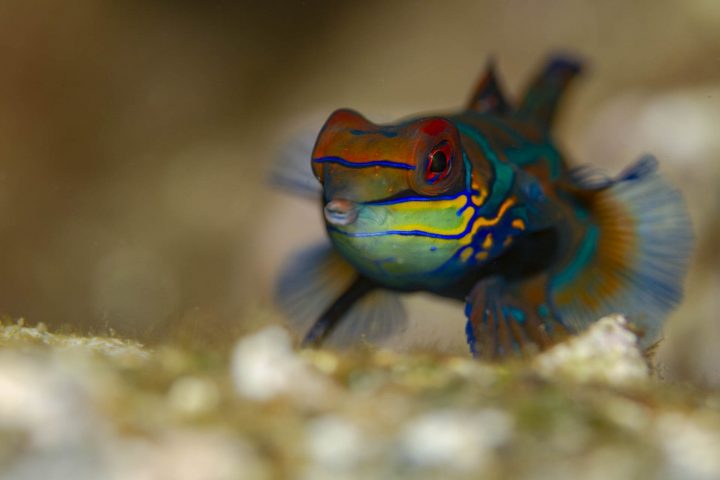 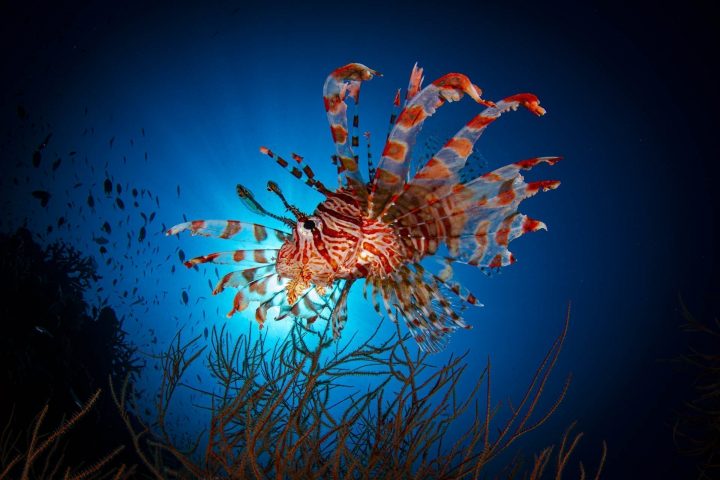 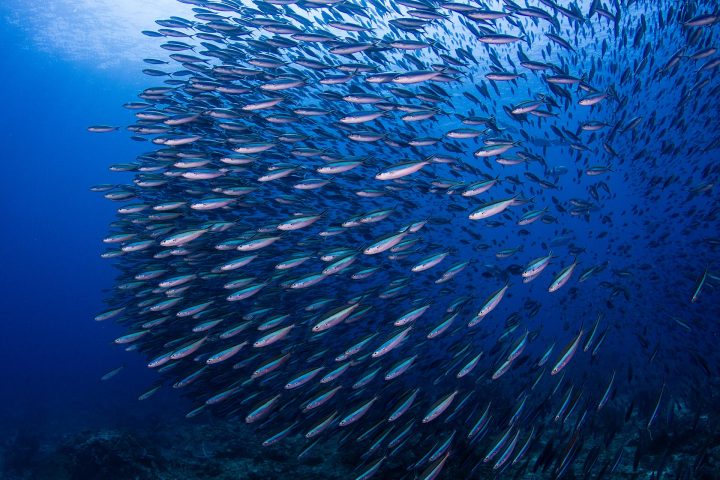 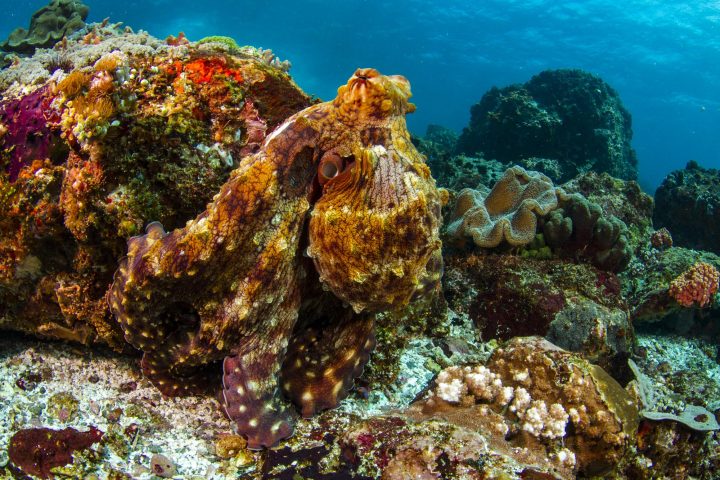 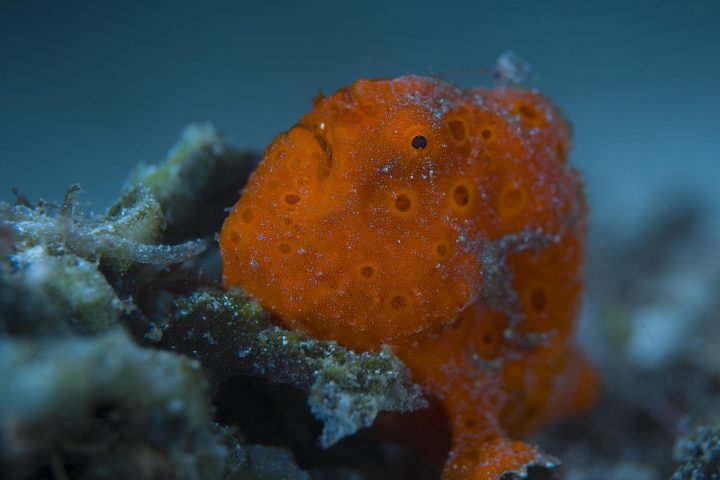 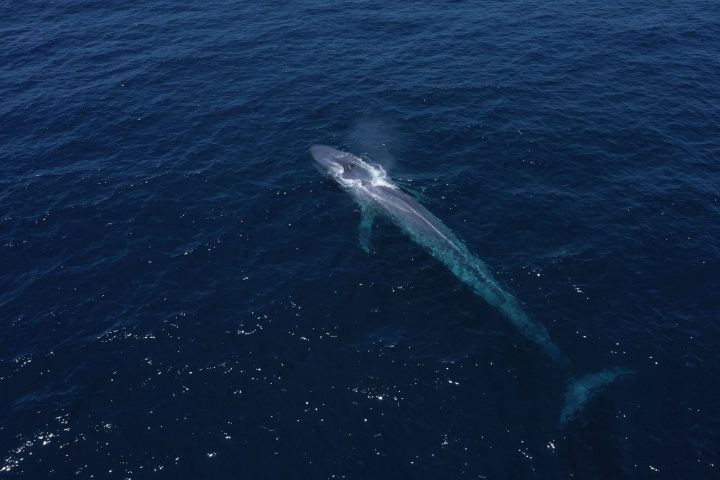 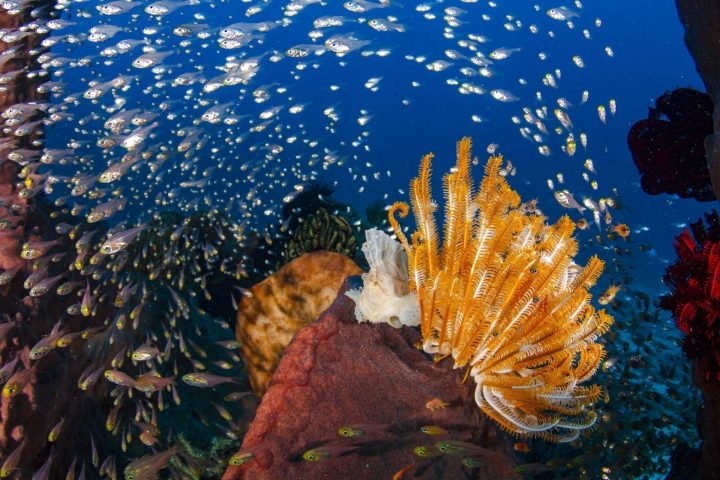 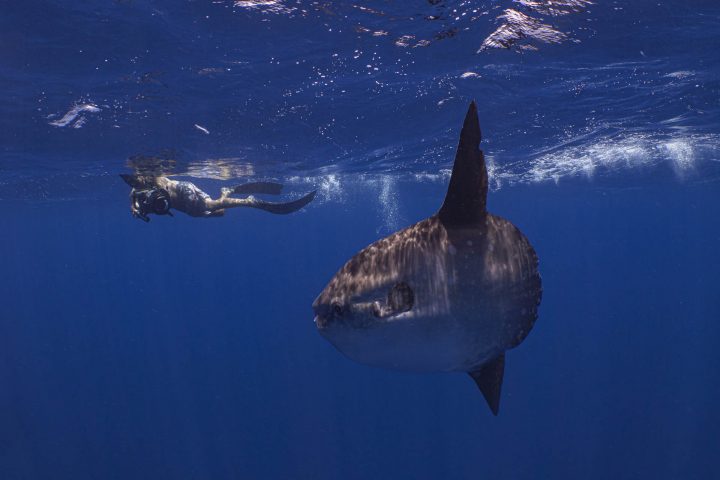 Alor follows a similar snorkeling season to Komodo as it’s within that southern chain of islands in Indonesia. The best snorkeling and most predicable weather occurs during the area’s dry season—from March until November. Winds are milder during these times, and rain is infrequent. Air temperatures during the peak season are generally around 85ºF in the day and around 80ºF at night. Water temperatures are typically around 82ºF but can drop to 77ºF at certain sites when the current is rising.

Marine life encounters really don’t change too much throughout the year as most of the inhabitants aren’t migratory species, with the exception of whales who do frequently pass through the area towards the beginning of the snorkeling season. Other than that, on any one of our snorkeling safaris to Alor, you can expect to have beautiful reefs, welcoming interactions with members of the local fishing community, clouds of colorful reef fish, schools of larger fish, possibilities of mola molas, reef sharks, and so much more!

With the variety of guide-led group snorkeling safaris that we offer, there are a number of ways to snorkel in Alor.

One of the quickest and easiest ways—logistically, is to join a snorkel safari that we call the Alor Snorkel Week. With this trip, we fly as a group from Jakarta to Alor where we’re met by the staff from Alami Alor Resort and transferred, via several air-conditioned cars, to the resort where we’ll be based for the duration of the tour. Every day after breakfast we’ll jump on our own private snorkel boats complete with guides and head out for at least three different snorkels on three different sites. The resort’s fantastic house reef is also always open for those that want to spend a day relaxing at the resort and snorkel at their leisure, or for those that just haven’t had enough and want to spend every waking moment in the water. As with just about all our snorkeling safaris, all meals, snorkeling, accommodations, transfers, and internal flights are included. Alcohol and rental equipment are generally the only additional costs.

Our combination tours, which include Alor as well as one or more destinations in Indonesia, like Komodo, or in the case of our “Epic Indonesia Snorkeling Safari”; Komodo, Bali, Wakatobi, and Misool in Raja Ampat. Everything runs the same on these tours while in Alor, only we may be arriving and departing from and to different destinations depending on the itinerary of the snorkel safari. These combination tours are a great way to experience the jaw-dropping beauty of Alor while also being able to see and experience some of the other top snorkeling areas in Indonesia.

Alex Lindbloom
Alex is a Snorkel Venture and Dive Safari Asia guide as well as the video and photo pros for both companies. Alex is also a field editor for a popular underwater photography magazine. Prior to joining Snorkel Venture in 2018 Alex lived and worked all over the world working as an underwater cameraman, with five of those years living/working on a yacht in Indonesia. Alex's images and videos have garnered many international awards such as Underwater Photographer of the Year and can be seen on NatGeo, Discovery Channel, the UN Building, and various magazines.
Previous postRaja Ampat Snorkel Guide
Next postNorth Sulawesi Snorkeling Guide