It’s a common misconception that you don’t see as much when you snorkel when compared to scuba diving. This idea is generally put forward by divers who have spent little to no time snorkeling, or maybe have just been snorkeling in the wrong areas. Yes, it’s true there are certain species that prefer the deeper portion of the reef, however, you can also argue that there are certain creatures who are typically more present in the dappled light of the shallows. Living in Asia and working as an underwater photographer I’ve spent my fair share of time in both the deep and shallow, and I can say without a doubt, the shallows rock. 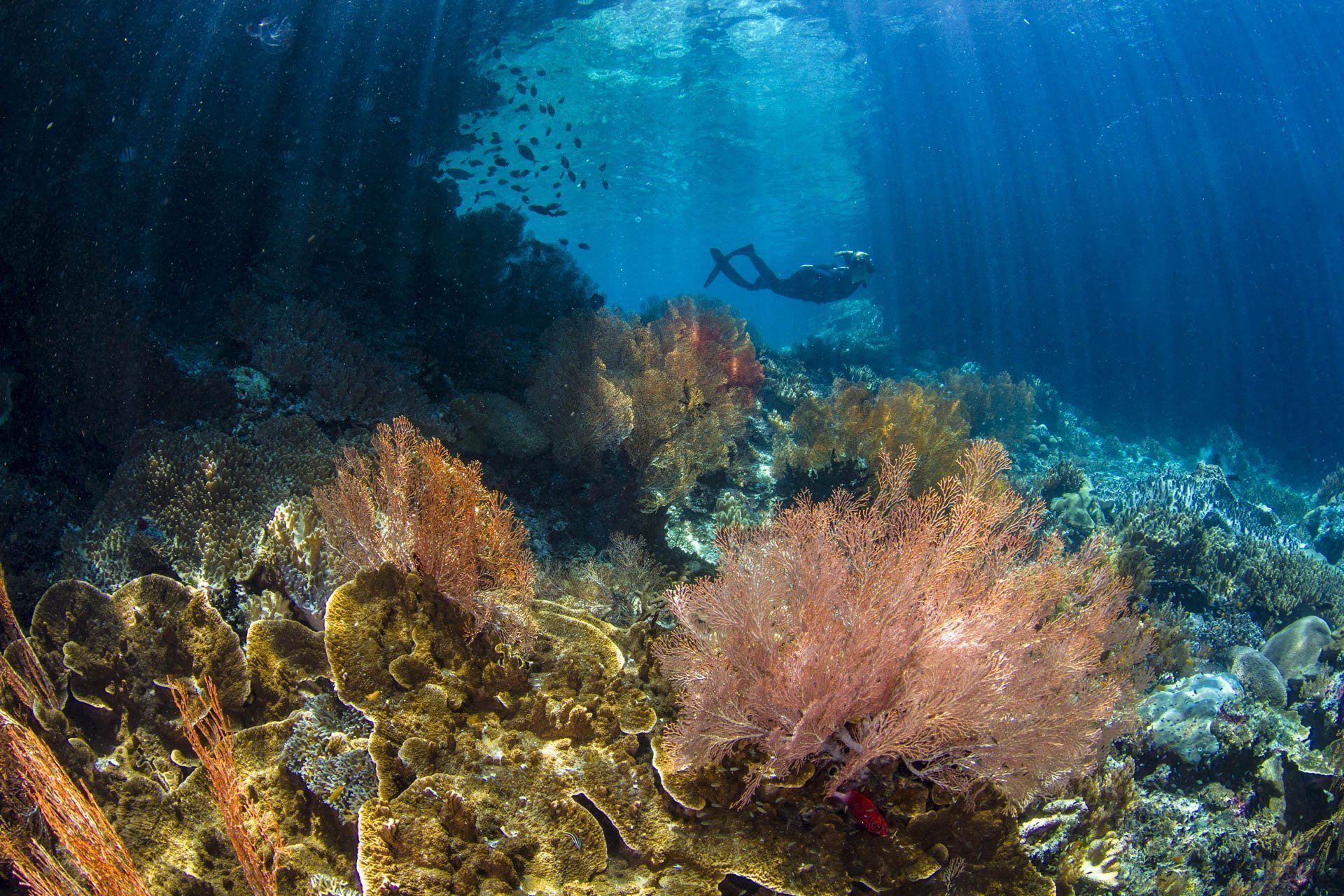 In Bali, Komodo and Raja Ampat, fleets of mantas feed directly on the surface while other species like turtles regularly emerge from their reef buffet for a breath of fresh air. Then, of course, there are the surprise visitors you often find wandering around the shallows like whale sharks, dolphins, and in one very exciting snorkel session—a giant sunfish. While these pelagic experience will no doubt get your blood pumping and leave you with some lasting memories, one of most amazing experiences you will continuously have is just drifting over the vast fields of immaculate shallow coral reefs.

There is no better place to enjoy pristine reefs than in Indonesia. With over seventeen thousand islands in the heart of the coral triangle, the snorkeling possibilities seem endless. To help narrow things down though, I’de just like to take this time to focus on a few regions within Indonesia where the snorkeling is truly epic, starting with Bunaken National Park in northern Sulawesi. This marine park is home to some excellence snorkeling, and a lot of it is accessible by just walking out from your resort. The underwater topography is characterized by fringing shallow coral reef plateaus which begin as shallow as a meter and gradually drops to about five meters, before abruptly turning into a vertical wall. The reefs in Bunaken are covered in an array of hard corals and sponges with no shortage of green sea-turtles, thanks to the turtle conservation projects from resorts like Siladen. 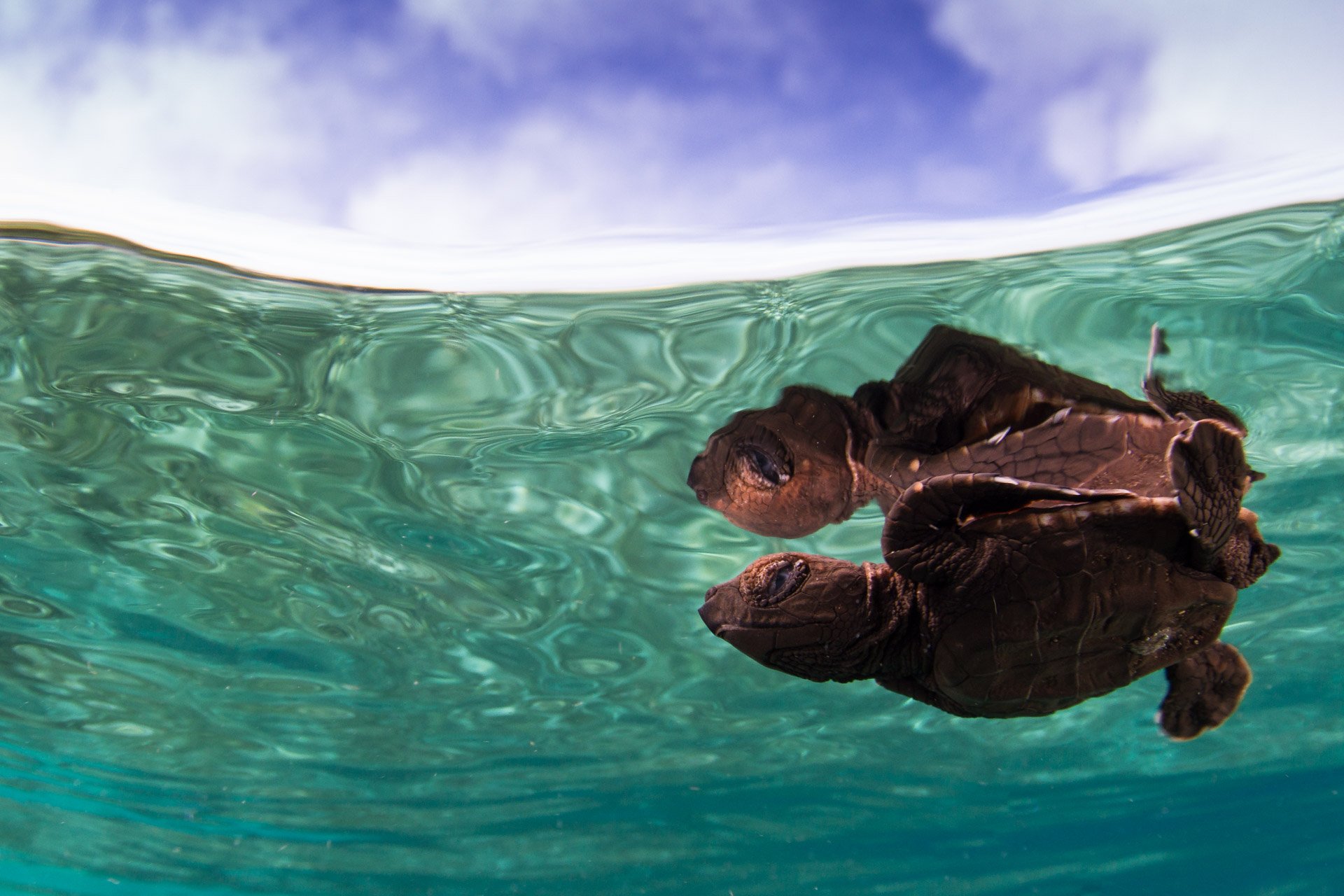 One of my favorite things to do while snorkeling in Bunaken is to let myself drift over the fields of coral until I reach the point where the reef just plunges into the blue abyss, and then just let myself float over the several hundred meters of blue nothingness. My fear of heights and sound logic have never allowed me to go hang-gliding, but I imagine that feeling of running down a grassy slope and off a vertical cliff into nothing is the probably most relatable experience you could have on land, only a billion times scarier. I’ll stick to the reefs thank you very much. 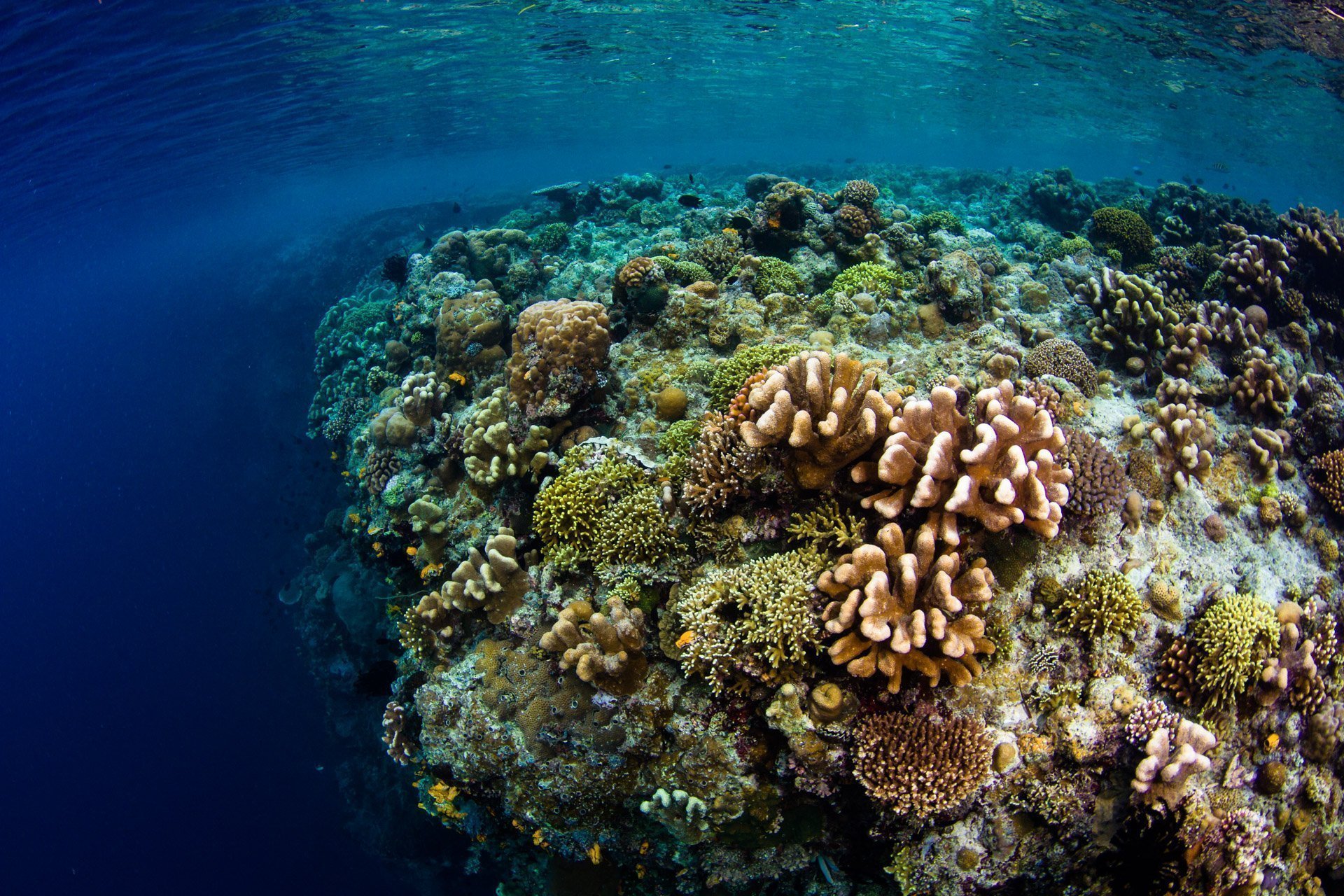 You have no doubt heard about Komodo, if not for its world-class diving than for its infamous giant lizards. Komodo also has some absolutely amazing snorkeling with a huge variety of styles. Peaceful drifts over immaculate reefs, placid mangroves, vast seagrass beds, and bays where mantas are known to feed in large numbers. One of my favorite sites for a really amazing snorkel experience, which could easily last hours should you choose, is in the north of Komodo and goes by a couple names. It’s most commonly known as Shotgun or the Cauldron thanks to the current that propels you through a narrow channel between two small islands and essentially shoots you out onto the other side. After the exhilarating drift over the giant trevallies, snappers, and white-tip reef sharks who hang in the current and you cruise pass, you’ll find the that current suddenly slacks off and you are left floating over arguably one of Komodo’s most pristine reef. Coral bommies brimming with hard and soft coral nearly reach the surface while schools of reef fish, cuttlefish, and turtles indulge in the life-giving forces the reef provides. 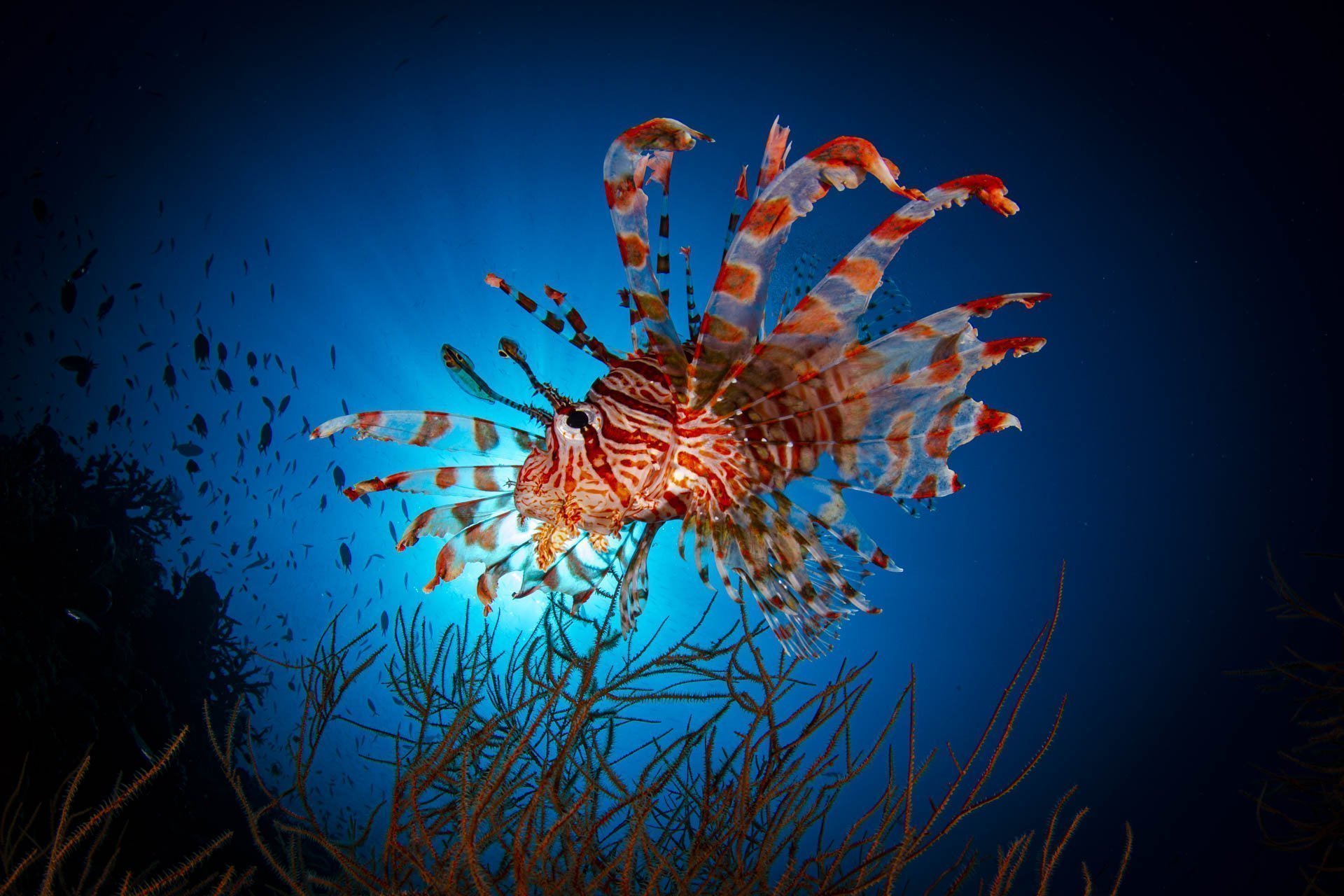 You can literally see anything at Shotgun. In my own experiences snorkeling here, I’ve encountered large schools of a hundred or more mobula rays and the less common cow-nose ray, and even glimpsed a dugong from the surface, not to mention the frequent manta encounters. A couple of years ago you may have seen a viral video of a diver who had managed to film the super rare megamouth shark, that video was actually filmed at Shotgun! As I said, you can literally see anything there.

Megamouths and fleets of mobula rays aside, one of the most interesting things about Shotgun or the Cauldron is the type of unusual manta behavior it encourages. From the current that pumps between the two islands and the surface counter currents created by the underwater topography, mantas have actually figured out how to use these opposing currents to their advantage. Mantas, usually juveniles, will ride the countercurrent up the reef until it changes in the stronger main current further up the channel. They will then join the main current, facing into it with their mouth wide open, siphoning up their planktonic supper while using only the smallest amounts of energy. As the main current pushes them back down the channel, they do a quick dip below the surface which then puts them back into the opposing counter current and takes them back to the top of the channel where they will repeat this cyclical feeding routine for hours. The best part is, as snorkelers, we get to sit and watch the whole process from a sheltered area with no main currents or counter currents to worry about, just peacefully bobbing along as the mantas go round and round. 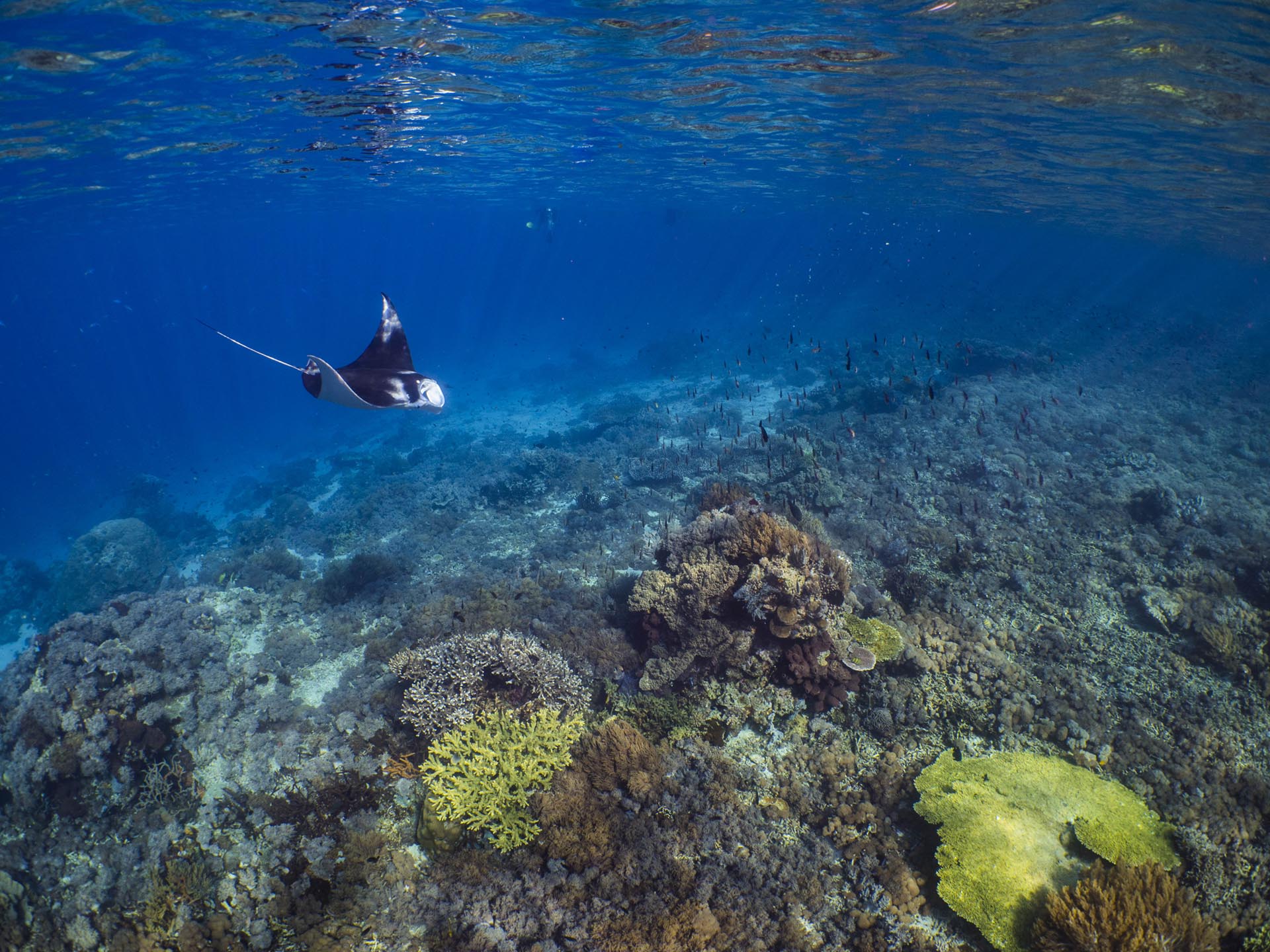 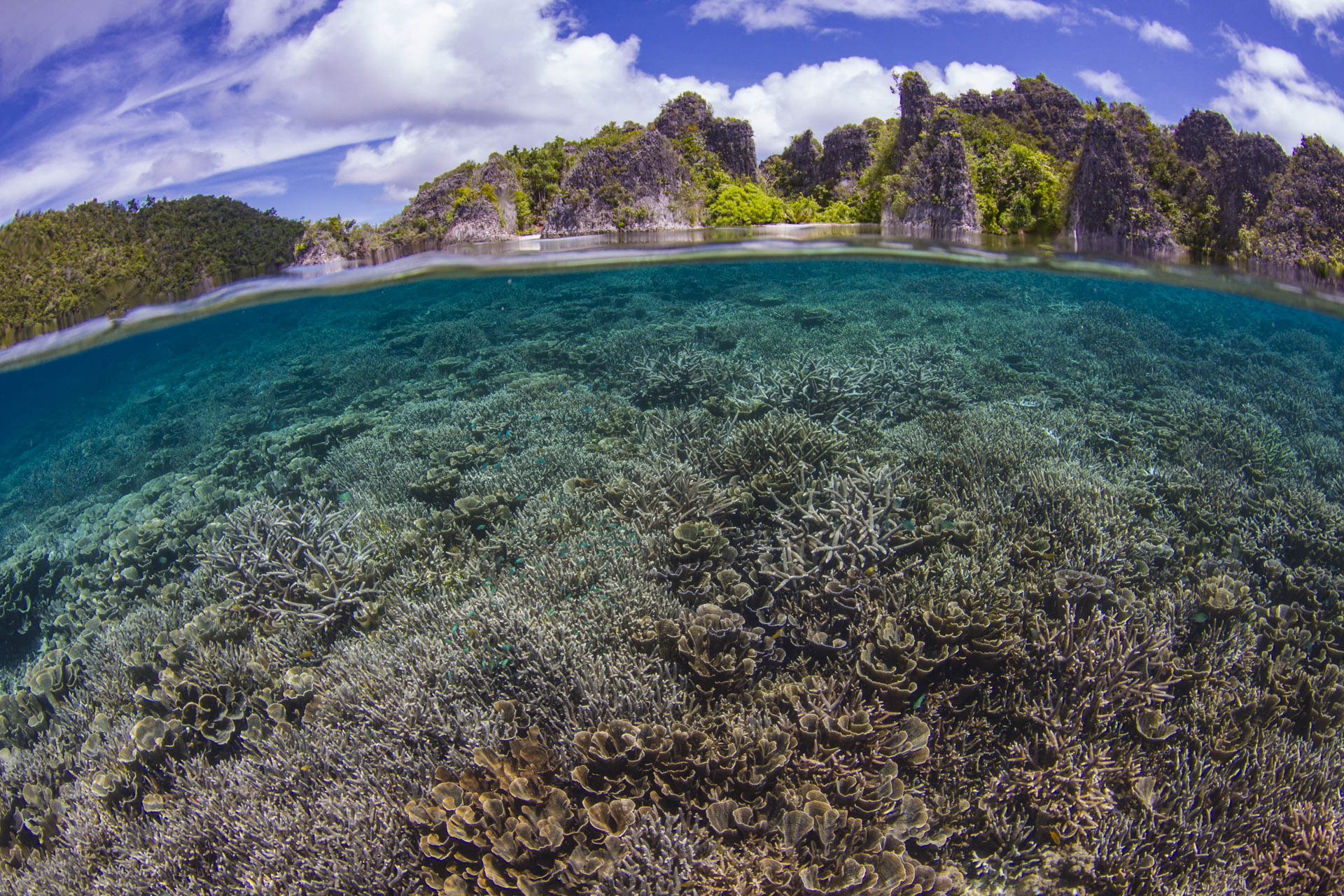 Raja Ampat is famous for a lot of reasons. Its iconic landscape is absolutely breathtaking while it tops the charts in terms of marine biodiversity. The reefs in Raja literally come to the surface, making it a magical place for snorkelers. One of the most unique types of shallow water experiences which makes Raja so special doesn’t actually take place on a reef, but around any one of the wood jetties in front of the local villages. 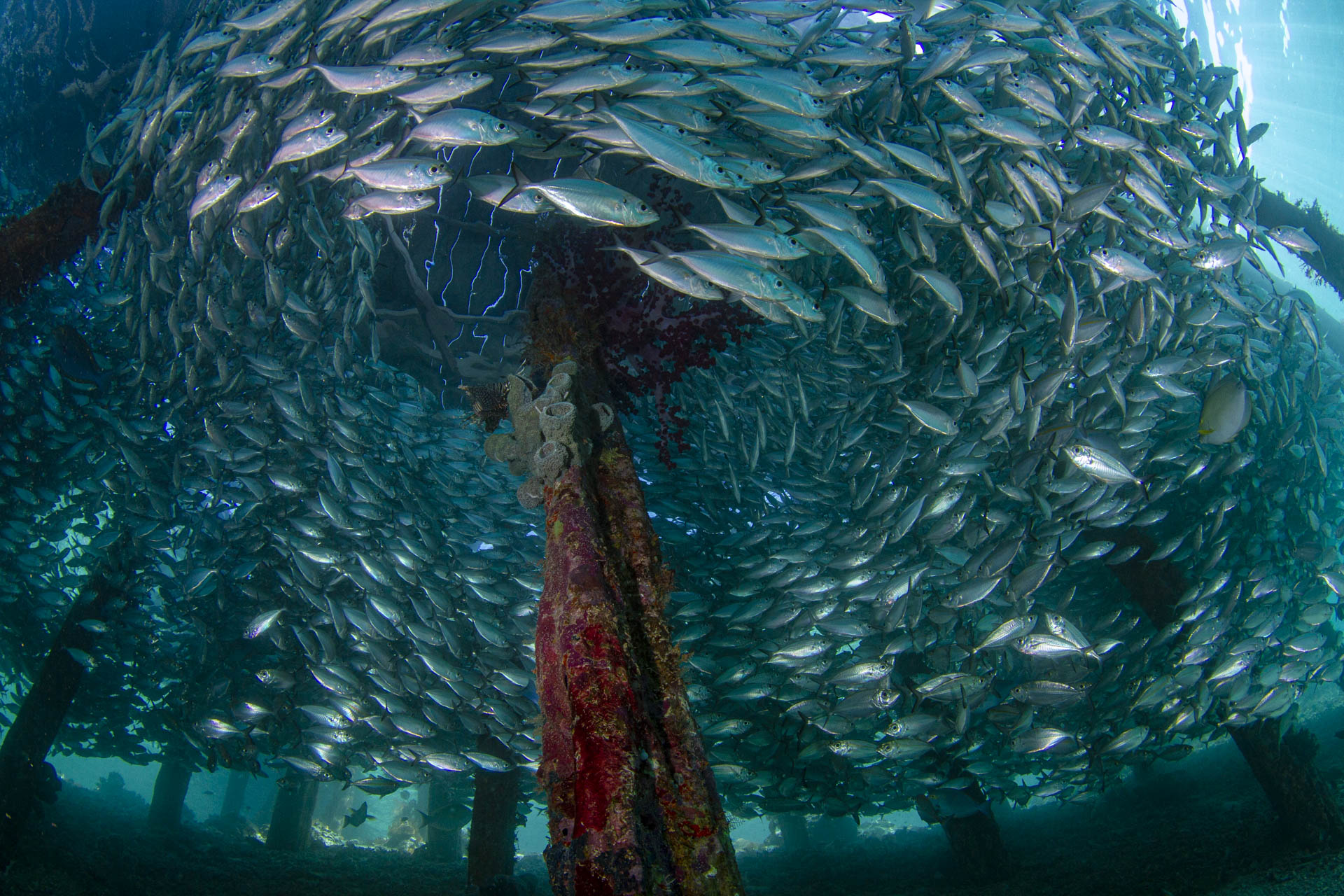 Sawanderek, a quintessential island village in the north of Raja Ampat has one of the most amazing jetties in the area. It’s wood pilings are encrusted in lush soft coral, sea fans, and even a large table coral has magically sprouted out of the vertical beams as if it was a branch on a tree. It may seem unusual to paddle beneath the wooden structure but it’s completely safe, and you’ll be amazed at the fish life that now calls the area home. Giant clams sit motionless on the bottom as large formations of sweetlips and batfish congregate close the structure’s supports. If you’re really lucky, you may even find a dense shoal of silversides and scads using the jetty for protection. If you decide the jetty is not for you, just turn around and you’ll be floating above that iconic terracing reef-scape Raja is known for. 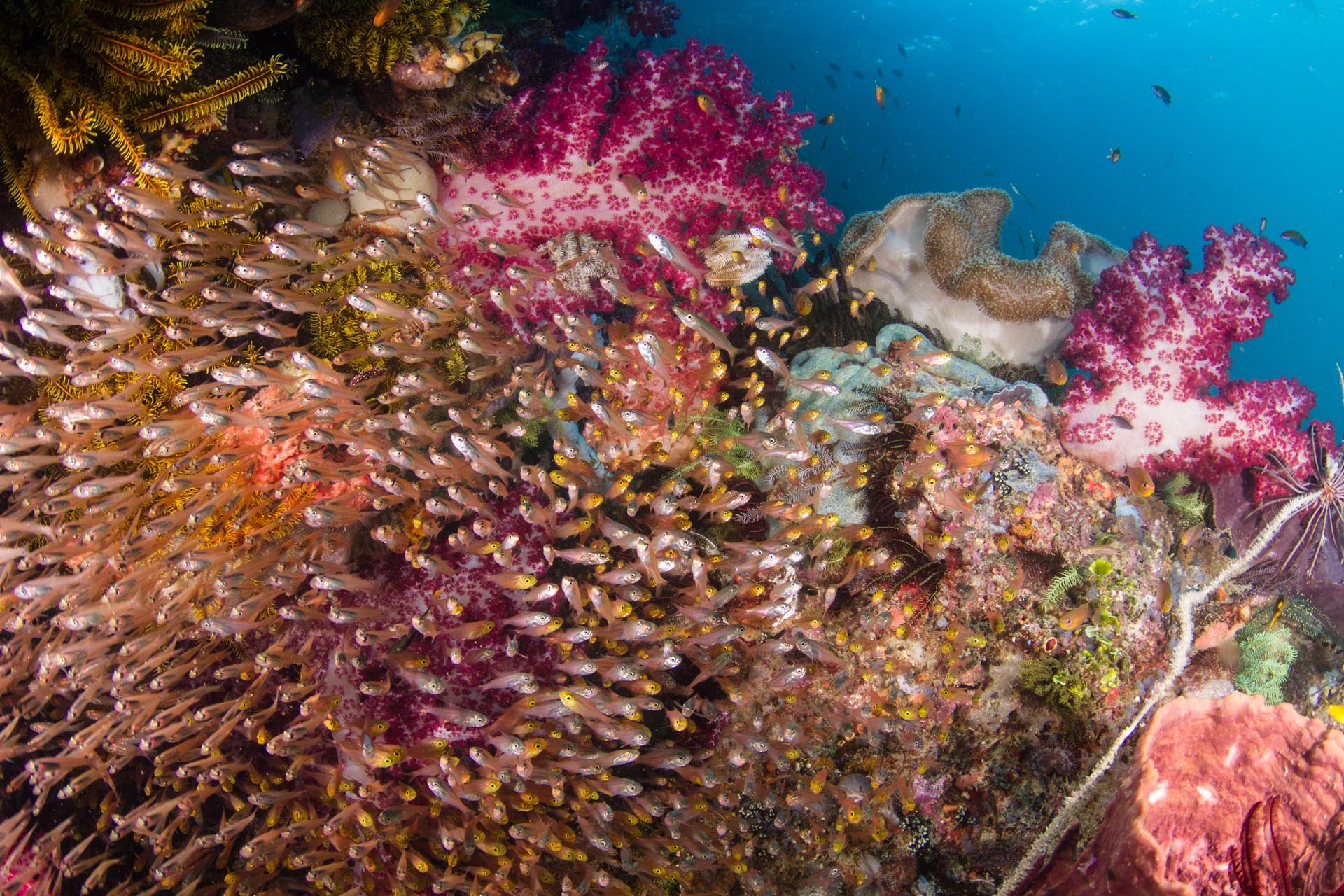 Everyone has a different experience in mind when they immerse themselves in the ocean. Some may love the idea of putting on thick wetsuits and decorating their BCD’s with knick-knacks they same way one would decorate a Christmas Tree. Others may find peace or freedom of the idea of amicably floating along with nothing more than a plastic tube to breath through. There is no right or wrong in choosing snorkeling over diving or vice-versa, there is just your own personal preference. Diving a bit deeper has its obvious benefits just as spending time in the shallows do. However, if it’s pristine tropical reefs beautifully illuminated by the power of the sun with a solid chance at encountering some of the ocean’s famous residents, there is no better place to spend your time than the shallow reefs of Indonesia.